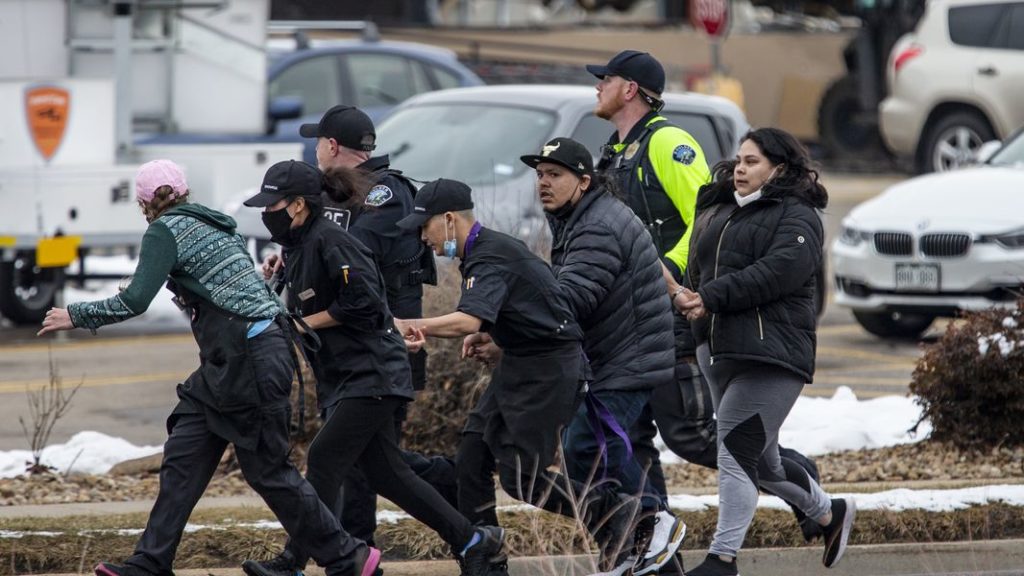 A gunman killed at least 10 people, including a police officer at a grocery store in Colorado on Monday, police said, in the latest shooting to hit the western state–the scene of two of the most infamous US mass murders.

The shooter is being held in custody and was injured, told Michael Dougherty, district attorney for Boulder County, located 30 miles (50 kilometers) northwest of the state capital Denver.

Among those dead was “heroic” police officer Eric Talley, 51, who was the first to respond to the scene at a King Soopers supermarket, said police chief Maris Herold.

“We know of 10 fatalities at the scene, including Boulder PD officer Tally, he responded to the scene and was fatally shot,” said Herold.

Live-streamed video earlier had showed a white middle-aged man — shirtless and seemingly covered in blood — detained by police and led from the supermarket.

The suspect in custody was the only person suffering “serious injuries at this point,” said police commander Kerry Yamaguchi, without confirming that the man in the video was the suspect, or any possible motive.

Majority leader Chuck Schumer said the Senate “must and will move forward on legislation to help stop the epidemic of gun violence.”

“My heart is breaking as we watch this unspeakable event unfold in our Boulder community,” said Colorado governor Jared Polis, calling the incident a “senseless tragedy.”

“Words can do no justice to the tragedy that has unfolded this afternoon,” tweeted Boulder mayor Sam Weaver.

Police responded to phone calls of shots fired in the area, and a possible person with a patrol rifle, around 2.30pm local time (1830 GMT), said Herold.

Eyewitnesses inside the supermarket said they heard multiple gunshots before fleeing through the back entrance.

“I just nearly got killed for getting a soda and a bag of chips,” Ryan Borowski, who was in the store when he heard at least eight gunshots, told CNN.

“It felt amazing that everybody was helping each other out and that our instincts were on the same page. I don’t know why other people didn’t, and I’m sorry that they froze. I wish that this just didn’t happen.”

Unverified early images livestreamed by an eyewitness showed at least three people lying prone on the ground both inside and outside the store, before multiple new gunshots rang out.

Dozens of armored vehicles, ambulances and armed personnel, including FBI agents and SWAT teams, deployed to the scene.

Later, shoppers who had been led safely out of the store sat wrapped in blankets, talking to emergency workers in the snow-covered parking area.

“Our hearts are broken over this senseless act of violence,” said King Soopers spokeswoman Kelli McGannon, praising “first responders who so bravely responded to these acts of violence.”

The shooting follows another mass shooting at Asian-owned spas in the southeastern state of Georgia that left eight dead last week.

Colorado has previously suffered two of the most infamous mass shootings in US history.

In 1999, two teenage boys shot and killed 12 classmates and a teacher at Columbine High School before dying by suicide.

Then in 2012, a heavily armed man stormed a movie theater showing a Batman film in Aurora, Colorado, murdering 12. The gunman is now serving a life sentence without the possibility of parole.

“This administration will not wait for the next mass shooting to heed that call,” Biden said.

On Monday, Colorado senator Michael Bennet — a Democrat — urged Americans “to revisit a national conversation about gun violence that does not regress into partisanship.”