Children continue to pay the heaviest price in Yemen as the conflict enters its seventh year. 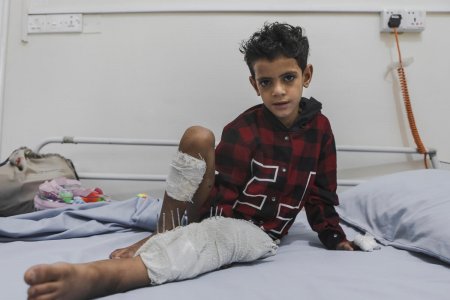 In addition, the conflict is getting deadlier for children. In 2018, one in five civilian casualties were children, but in 2019 and 2020, that jumped to one in four.

It’s a stark reminder that children and families are paying the heaviest price for this brutal war through no fault of their own.

As Yemen marks six years of conflict, its people are suffering the biggest humanitarian crisis in the world, where 2 in 3 people need help to survive, and where children are dying from entirely preventable causes in their thousands.

The conflict has also led to serious threats to children’s safety and well-being. Last year alone, Save the Children identified and assisted 316 child survivors of at least one of the six grave violations against children in conflict.

Just when Yemeni children need the world’s help, overall funding levels currently stand at less than half of what is needed, Save the Children warned. This year, funding for the organization’s treatment of children impacted by the conflict has reduced by more than 40 percent compared to last year.

This funding shortfall will affect children like eight-year-old Omar*, who was out playing in the city of Taiz a few weeks ago when an artillery shell exploded nearby, seriously injuring him and killing his elder brother Mahmoud*. Save the Children is covering Omar’s medical expenses.

“I was on my way home with a friend, and I wanted to go find my brother when the artillery shell hit us. I was paralyzed for a moment. I was looking for my brother, but I saw an old man on the ground. Then someone on a motorbike picked me up and took me to the hospital. I want toys to be able to play but I don’t want any shelling.”

“I want the world to alleviate the suffering of the children in Taiz. I wonder why a shell should kill a child who is just playing. This is the biggest crime; it destroys the lives of mothers and children. Omar* keeps telling me he hopes there will be another explosion so he can play again with his brother [in heaven].”

The international community has tried but so far failed to bring the warring parties to the negotiating table or to implement a ceasefire, as fighting continues to persist with devastating consequences for children. Meanwhile, the warring parties have shown little regard for human life and civilian infrastructure. The health system is at breaking point, with more than half of all health facilities closed or only partially functioning. Many hospitals have been damaged by airstrikes or ground fighting, and there is widespread critical shortage of essential medicines and qualified staff.

“Yemeni children have been living through a horrific and endless nightmare for six years now. Children continue to be killed and injured on a near-daily basis. They go to bed hungry, see people starving to death, and miss out on school. Everyday children risk death or injury if they venture outside and get caught up in the frequent shelling and bombing of places where they should feel safe – homes, schools, hospitals, and marketplaces.

“All parties to the conflict must fully implement a ceasefire as soon as possible. The ceasefire should be used to work towards a sustainable peace and a political solution to this war – it’s the only way to truly end this humanitarian catastrophe.”

Gabriella Waaijman, Global Humanitarian Director for Save the Children, said:

“Without urgent action, the humanitarian situation, already the worst in the world, is set to deteriorate further with the very real risk of famine, mass civilian casualties, and total collapse of basic services. This is a man-made disaster resulting from a conflict that is being waged with near complete disregard for the well-being and safety of the civilian population. Almost every day we hear of children and families caught up in the fighting, often paying with their lives.

“If the UN’s predictions are correct, the worst famine in decades could kill hundreds of thousands of children. We must do everything we can to prevent this from happening.”