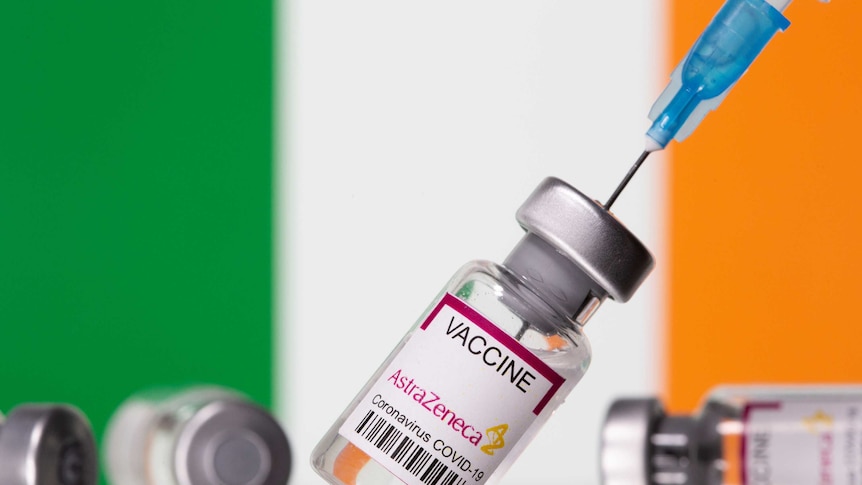 AstraZeneca says a review of safety data of people vaccinated with its COVID-19 vaccine has shown no evidence of an increased risk of blood clots.

Key points:
Ireland is the latest country to suspend the use of the AstraZeneca vaccine.
AstraZeneca, the European Medicines Agency and the World Health Organization all say the vaccine is safe.
Irish authorities concede they “may be overreacting”
AstraZeneca’s review, which covered more than 17 million people vaccinated in the United Kingdom and European Union, came after health authorities in some countries suspended the use of the vaccine over clotting issues.

“A careful review of all available safety data has shown no evidence of an increased risk of pulmonary embolism, deep vein thrombosis or thrombocytopenia, in any defined age group, gender, batch or in any particular country,” the company said.

LIVE UPDATES: Read our blog for the latest news on the COVID-19 pandemic.
Italy’s northern region of Piedmont also said it would stop using a batch of AstraZeneca coronavirus shots after a teacher died following his vaccination on Saturday.

The region, around the northern city of Turin, had initially suspended all AstraZeneca vaccinations in order to identify and isolate the batch from which the jab administered to the teacher came.

The statement did not specify what batch it had banned, and did not say how the teacher died. Italian newspapers reported it was batch ABV5811, and a source close to the regional government confirmed it to Reuters.

“It is an act of extreme prudence while we verify whether there is a connection. “There have been no critical issues with the administration of vaccines to date,” Luigi Genesio Icardi, head of regional health services, said in the statement.

And the AstraZeneca logo sits behind vials of generic vaccine.
The AstraZeneca vaccine is the one most Australians will receive.(Reuters: Dado Ruvic)

The European Medicines Agency has said there is no indication that blood clotting issues were caused by the vaccination, a view echoed by the World Health Organization.

AstraZeneca said 15 events of deep vein thrombosis and 22 events of pulmonary embolism had been reported so far. Other licensed COVID-19 vaccines have reported similar rates of clotting in patients who have been vaccinated, according to AstraZeneca.

The company said additional tests were being carried out and said none of the re-tests had shown cause for concern.

Can vaccinated people still transmit the virus?
A monthly safety report would be made public next week, AstraZeneca said.

The AstraZeneca vaccine, developed in collaboration with Oxford University, has been authorized for use in the European Union and many countries, including Australia, but has not yet been approved by US regulators.

The company is preparing to file for US emergency use authorization and is expecting data from its US phase 3 trials to be available in the coming weeks.

‘We may be overreacting’: Irish authorities
Irish authorities received some reports of clotting similar to those seen in Europe last week but nothing as serious as the cases in Norway, Deputy Chief Medical Officer Ronan Glynn said.

Dr Glynn said the fact that the Norwegian cases related to a cluster of four unusual clotting events involving the brain in 30-40-year-old raised the level of concern.

He said Ireland was suspending the rollout because it was due to administer the AstraZeneca vaccine to people of a similar age with serious underlying conditions next week.

“It may be nothing, we may be overreacting, and I sincerely hope that in a week’s time that we will have been accused of being overly cautious,” he told the national broadcaster RTE.

“Hopefully we will have data to reassure us in a few short days, and we will be back up and running with this.”

Read more about the coronavirus.

Why is Ben ready to give up on coming home?
Bronte gave her father COVID-19, and a year later, she still feels guilty.
AstraZeneca vaccinations make up 20 per cent of the 590,000 shots administered among Ireland’s 4.9 million population, mainly to healthcare workers, after its use was not initially recommended for those over 70, and the company supplied far fewer vaccines to the EU than agreed.

There have been 4,534 COVID-related deaths in Ireland. The number of cases per 100,000 people in the past 14 days fell to 151 from a high of over 1,500 in January, although officials are concerned over a slight rise in new cases in recent days.

In response to Ireland’s decision, the UK’s medicine regulator said the available evidence did not suggest the vaccine was the cause of the clots.

What you need to know about coronavirus:
When will I get the vaccine?
The symptoms
The number of cases in Australia
Global cases, deaths and testing rates.