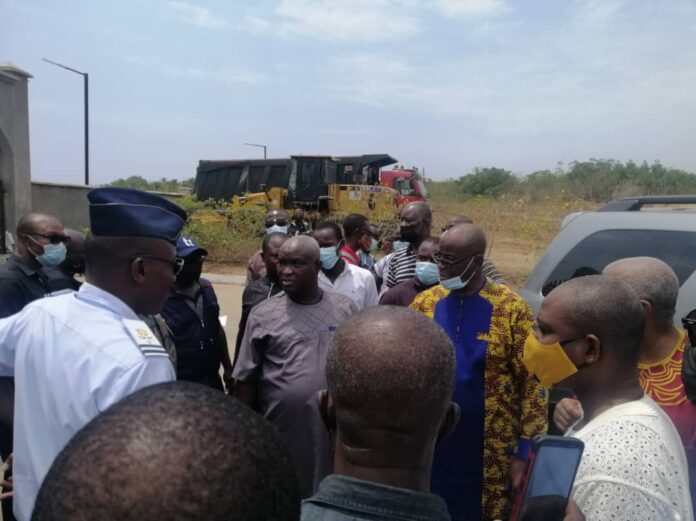 The LA Traditional Council has threatened to embark on a series of demonstrations should President Akufo-Addo fail to call the military to order.

It follows a near confrontation between the traditional authority and some military men on Friday, March 12, 2020 at Tse Addo in the greater Accra region over claims of encroachment on a 275-acre stool land which is yet to be delineated.

The traditional council is angry over what they describe as the continuous annexation of their lands by the military contrary to agreements held.

The land in question was a subject of contention for years with the government last year signing and MoU with the LA Traditional Council, the original owners of the land, for the renewal of the lease agreement for another 99 years. Under the new agreement, the LA Traditional Council will cede portions of the land to the Government for developmental purposes. Additionally, a portion of the land has been ceded to the Ghana Civil Aviation Authority since it has permanent structures on that particular land. The Lands Commission is expected to oversee the rest of the land belonging to the State.

Speaking to the media after a tour to assess the development currently underway by the military, Nii Adjei Koofeh IV, La Shikitele (Kingmaker) and Supreme Head of Nmati Abonase said the current happenings are injurious to their position.

“Their actions are quite disturbing to the LA stool. We have been very magnanimous to the state. The most prime lands of LA have been used for national purposes. The military has taken most of our land without proper documentation. All that came up during our deliberations at the ministry, so if they intend to do something, they should use due process. We expect the military to abide by the law and the tenets of the constitution.

“We have come a long way. And as I said, we are law-abiding citizens. We’ve given our due for national development, and we don’t think we should be mistreated. So, we are telling the president to attach a sense of urgency to this issue because we are leaders of the town, and we shouldn’t let those that we are leading lose hope in us.