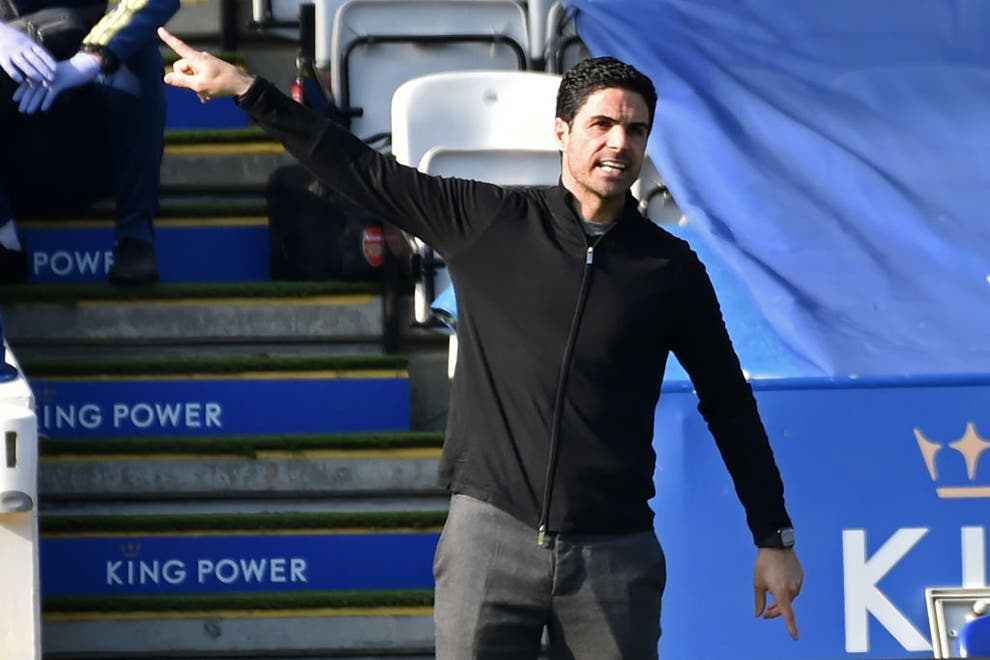 Mikel Arteta believes Arsenal are finally moving in the right direction after an impressive 3-1 comeback win at Leicester.

David Luiz and Nicolas Pepe scored either side of Alexandre Lacazette’s penalty at the King Power Stadium. Youri Tielemans opened the scoring for the Foxes but their top-four hopes were dented, with Harvey Barnes now set to be out for at least six weeks with a knee injury after being carried off during a miserable afternoon.

It was also Arsenal’s first win at a side in the top three of the Premier League since 2015 as the Gunners backed up Thursday’s last-32 Europa League victory over Benfica.

“The team is clearly improving, it’s taking a direction I like. It’s about consistency,” said Arteta, who was able to rest Bukayo Saka and keep Pierre-Emerick Aubameyang on the bench until the final six minutes.

“We are still giving things to the opposition – we did it against Benfica and we did it today. It’s something we have to eradicate to give ourselves the best possible chance.

“It’s about how we played against top quality opposition. We have to impose ourselves, it doesn’t matter who we play against, we have to have courage. I’m proud about winning but obviously the way we’ve done it.

“The way we are playing looks much closer to what we want. The way the team is evolving, we have some consistency in recent months.”

Tielemans gave the Foxes the perfect start when he drilled in his ninth goal of the season after Arsenal allowed him a free run into the box after seven minutes. It was as good as it got for the hosts, though, as Arsenal took charge and thought they had a penalty after 12 minutes when Pepe went down under Tielemans’ challenge.

A VAR review overruled the call and awarded a free-kick instead after Wilfred Ndidi had clipped the winger outside the box first.

But the Gunners deservedly levelled six minutes before the break when Luiz crashed in a header from Willian’s free-kick.

Then, in first-half stoppage time, Lacazette made it 2-1 from the spot when Ndidi clearly handled Pepe’s shot in the box – although referee Paul Tierney still needed to refer to his monitor.

Barnes was carried off five minutes into the second half and two minutes later Pepe added a third, tapping in Willian’s cross after a quick break.

Jonny Evans also came off with a calf injury for the Foxes to add to their lengthy casualty list which includes James Maddison, Ayoze Perez, James Justin, Wesley Fofana and Dennis Praet.

Boss Brendan Rodgers confirmed Barnes is likely to be out until April and needs surgery.

“It’s not good news, it looks like he needs to go for an operation so he will probably be a minimum of six weeks,” Rodgers said, with the Foxes third in the top flight.

“He has had niggles with it, which is why we rested him on Thursday, but unfortunately it’s a bad one for him and a huge blow for us.

“We’re down to the bare bones, we’ve carried it all season and the players have been great but even when we got the first goal they had the greater energy.

“We have suffered with it a lot, we’ve had to get through it but when you are missing the influential players it makes it more difficult.

“It’s a disappointing one and now we have to go away and face the challenge of finding a way to win the next game.”