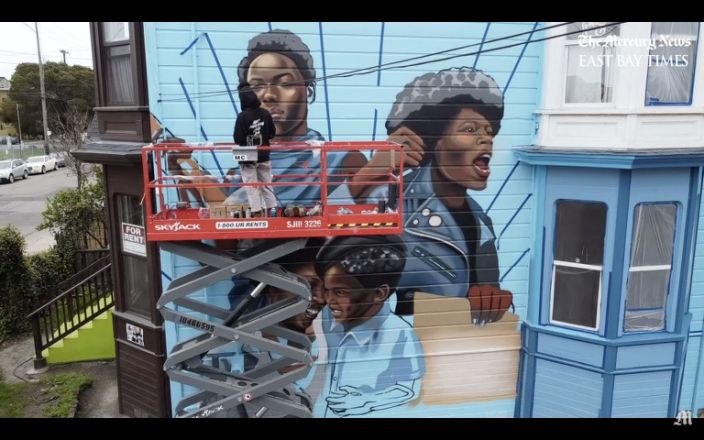 The Black Panther Party was founded in Oakland, California in 1966 and active into the 1980s. The political organization fought police brutality and advocated for Black empowerment while being labeled as enemies of the state by the U.S. government.

Now, in honor of Black History Month, a homeowner in Oakland whose house is located across the street from where Black Panther founder Huey P. Newton was murdered, has offered up her house as a canvas for a mural paying homage to the women of the party.

Jilchristina Vest says she bought the house back in 2000 because she wanted to live in the historic district.

“I purchased my house here in West Oakland because of the history of the Black Panther Party, and I wanted to be close to that. I wanted to be around that.”

Vest says she came up with the idea of the mural after last year’s George Floyd protests and the lack of protests she saw for Breonna Taylor, also killed by police.

She decided to focus on the women of the Black Panther Party, who she believes, despite being the backbone of the movement, do not receive the same attention as the more famous male icons.

Vest hired muralist Rachel Wolfe-Goldsmith for the project who says she used iconic photographs of the Black Panthers as inspiration for her work.

“So we have one woman protesting. She’ll have buttons that are relevant to all of the stuff that was going on then and now. And then we have the woman with the rifle kind of watching over everything. And then I wanted to bring that all together with the woman who is in her medical outfit and holding her child and have that love mother-child relationship at the forefront of this,” says Wolfe-Goldsmith.

Vest says the women represented on her wall were instrumental in creating groundbreaking programs, like free breakfasts for children and the opening of health clinics in underserved communities.

“I really want to make sure that I do everything I can for people to understand that the Black Panther Party wasn’t a group of terrorists and it wasn’t a bunch of men holding guns. They picked up guns when guns were drawn on them. They were protecting themselves or protecting their families. They’re protecting their children and protecting their community from police brutality, which is still relevant today,” she says.

“Like who wouldn’t defend their family and their community when they’re being murdered, when they’re being oppressed, when they can’t get jobs or housing, you know what I mean? So I think that the rest of America is ready to look at the complexities and the depth of the struggle on a systematic level. And what the Panthers were doing was addressing these systematic issues and creating solutions within the Black community for themselves,” says Wolfe-Goldsmith.

For decades the Black Panther Party also spoke out against police brutality, which is still being addressed today by the Black Lives Matter movement.