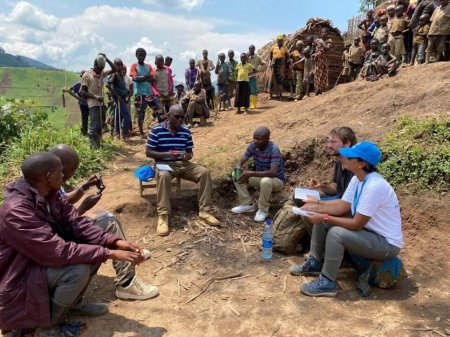 UNHCR, the UN Refugee Agency, is alarmed at ongoing atrocities carried out by armed groups in eastern Democratic Republic of the Congo (DRC), which have become part of a systematic pattern to disrupt civilians’ lives, instill fear and create havoc.

In 2020, UNHCR partners registered a record of more than 2,000 civilians killed in the three eastern provinces (1,240 in Ituri, 590 in North Kivu and 261 in South Kivu). The majority of these attacks were attributed to armed groups.

The killings and kidnappings have continued in North Kivu in 2021, where attacks have also been directed against displaced civilians. On 24 January, an armed group killed two men and seriously injured six others in an incursion into a site for forcibly displaced people in North Kivu’s Masisi Territory.

A week prior to the recent attack, three people living in Kivuye displacement site in Masisi Territory, which is supported by UNHCR, were kidnapped during raids by an armed group. This group has also imposed a 7 p.m. curfew in the area, after which they visit the residents’ houses to force ‘security’ payments.

UNHCR and its partners have heard numerous testimonies from people who have survived this targeted violence. Between December 2020 and January 2021, at least seven incursions by armed groups into five different sites have been reported in Masisi Territory.

More than 88,000 displaced people reside in 22 sites supported by UNHCR and the International Organization for Migration (IOM). Many others live in spontaneous sites – while some 90 per cent are accommodated in host communities.

Attacks by armed groups are carried out on the suspicion of collaboration with other groups or the Congolese security forces. Some of these sites are under threat from multiple armed groups. Civilians find themselves trapped in the middle of confrontations between different groups.

In November 2020, armed groups introduced illegal taxes on people who want to access their farms in their villages of origin in Rutshuru Territory. This has cut off many from their only source of food and income. The displaced people cannot afford to pay these imposed taxes as they have no income, thereby compounding the situation.

While the Congolese army’s military operations against militia groups are more often successful than in the past, the armed forces do not have the capacity to maintain control of the areas they secure, thus leaving space for armed actors to reclaim those areas and to impose themselves on the local population.

UNHCR calls on all actors to respect the civilian and humanitarian character of displacement sites and is advocating for swift and independent investigations into the crimes committed so that the perpetrators can be brought to justice.

UNHCR is working together with local authorities and communities to protect civilians in the affected areas by strengthening local capacity and creating synergies between different local authorities and grassroots initiatives. We are also closely monitoring the situation in most areas through local and international partners.

More than five million people have been uprooted by insecurity and violence in the Democratic Republic of the Congo in the last two years, with nearly two million displaced in North Kivu Province alone, according to UN estimates. UNHCR’s efforts to help internally displaced people is facing severe funding shortfalls. So far only six per cent of the US$195 million that UNHCR needs for its vital operations in the DRC have been funded.