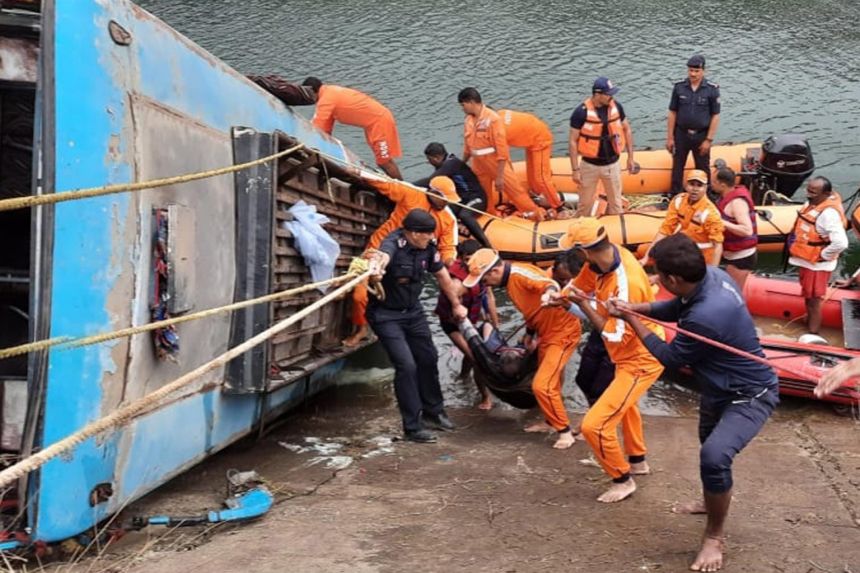 At least 40 passengers were killed and several others went missing on Tuesday after a bus carrying them skidded off the road and plunged into a canal in the central Indian state of Madhya Pradesh, officials said.

Seven people survived the accident and among them, some swam safely to the bank and others were rescued.

The accident took place near Patna village in Sidhi district, about 493 km east of Bhopal, the capital city of Madhya Pradesh.

According to officials, the driver of the bus lost control over his vehicle and plunged into the canal, where it submerged completely in water.

Following the accident, locals alerted the police who rushed to the spot to carry out searches for the missing.

“As of now 40 people were killed in this tragic accident,” an official at the district magistrate office Sidhi said. “The deceased include 21 men, 18 women and a child.”

Authorities have stopped the water to the canal from the nearby Bansagar dam in order to help the rescue efforts.

Officials said a team of disaster response force personnel was rushed to the spot and the bus was taken out of the canal with the help of a crane.

“Searches to trace the missing are underway,” the official said. “Since it is being reported over 50 people were inside the bus, the death toll is likely to go up then.”

Meanwhile, a huge crowd of people including the families and relatives of victims gathered along the banks to witness the rescue work and collect the bodies.

Police officials said the bus carrying over 50 passengers was heading to adjacent Satna district from Sidhi town when it fell into the canal.

Madhya Pradesh Chief Minister Shivraj Singh Chouhan has expressed grief over the incident and described it as extremely tragic. He has rushed two local ministers to the spot to oversee the rescue work and take stock of the situation. The local government has postponed all major events in the state.

Chouhan has announced a compensation of US$6,877 to each family that lost a member in the tragedy.

“What has happened is extremely tragic. Rescue work is already on. Two ministers are on their way to the site. Families of those who have died will be given a compensation of INR 500,000 (US$6,877). The entire state is standing with those affected,” Chouhan said in a video message.

The deaths in the accident have been widely condoled.

Indian Prime Minister Narendra Modi has also expressed grief over the deaths in the accident and ordered relief.

“Bus accident in Madhya Pradesh’s Sidhi is horrific. Condolences to the bereaved families. The local administration is actively involved in rescue and relief work,” a statement issued by Prime Minister’s Office said. “PM has approved an ex-gratia of INR 200,000 (US$2,751) to each family from Prime Minister’s National Relief Fund for the next of kin of those who have lost their lives due to the bus accident in Sidhi, Madhya Pradesh. INR 50,000 (US$687) would be given to those seriously injured.”

Preliminary investigations carried out by the police revealed the 32-seater vehicle had 54 passengers inside it at the time of the accident.

The local government has ordered a probe into the accident.

According to federal Road Transport and Highways Minister Nitin Gadkari, every day 415 people die in the country due to road accidents.