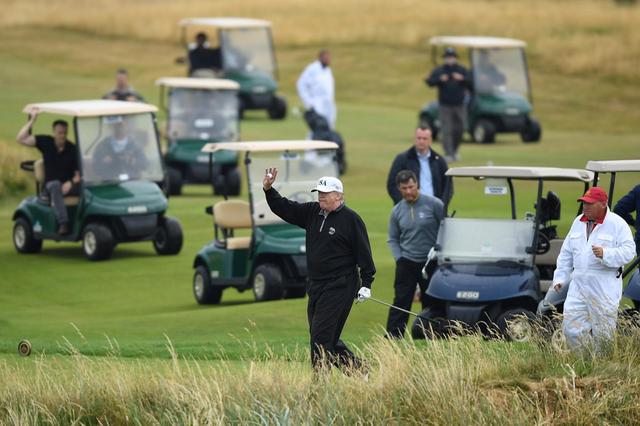 Scottish lawmakers are looking at whether to issue an unexplained wealth order against former US President Donald Trump over his purchases of two golf courses in Scotland.

Eric Trump, Donald Trump’s son, has called the move an attack based on “personal agendas” which ignores the economic benefits of the resorts in Ayrshire and Aberdeenshire.

But Scottish Green Party leader Patrick Harvie said there were “serious concerns” over the source of the money that Donald Trump and the Trump Organization used to buy them.

Unexplained wealth orders require individuals to explain the source of wealth used to acquire property and other assets in the UK, most often when potentially criminal activity is suspected.

“At a critical time when politicians should be focused on saving lives and reopening businesses in Scotland, they are focused on advancing their personal agendas,” said Eric Trump, executive vice-president of the Trump Organization.

The Trump Organization has two properties in Scotland; Turnberry, on the Ayrshire coast, and Trump International Links, in Aberdeenshire.

“If Harvie and the rest of the Scottish government continue to treat overseas investors like this, it will deter future investors from conducting business in Scotland, ultimately crushing their economy, tourism and hospitality industries,” Eric Trump said.

“The Trump Organization has invested hundreds of millions of dollars into the Scottish economy, rescued Turnberry, and rebuilt it into one of the finest resorts anywhere in the world.

In both Aberdeen and Turnberry, the Trump Organization has created thousands of jobs and has made an overwhelming contribution to the leisure and tourism industry.

Ahead of the vote, one protestor outside the parliament building at Holyrood was wearing a giant Donald Trump mask and carrying a placard saying ‘Investigate me!” He was also pulling a golf trolley and had his pockets stuffed with cash.

“As entertaining as Eric Trump’s tantrum is, he doesn’t say where his dad got the money to buy his Scottish golf courses, which is exactly why I’m calling on the Scottish Government to seek an unexplained wealth order,” Mr Harvie said.

“There are serious concerns about how he financed the cash purchases of his Scottish golf courses. The government must seek an unexplained wealth order to shine a light on Trump’s shadowy dealings.”

When Donald Trump visited Turnberry in 2018, thousands protested in Glasgow and Edinburgh and he was heckled as he played golf.

Last month, Scotland’s First Minister Nicola Sturgeon warned the outgoing president that he should not visit Scotland during the coronavirus pandemic to play golf.

And after the riot at the US capitol, which demanded that Donald Trump be declared the winner of the recent US election, the organizers of the British Open golf championship said the competition would not be staged at Turnberry for the “foreseeable future”.