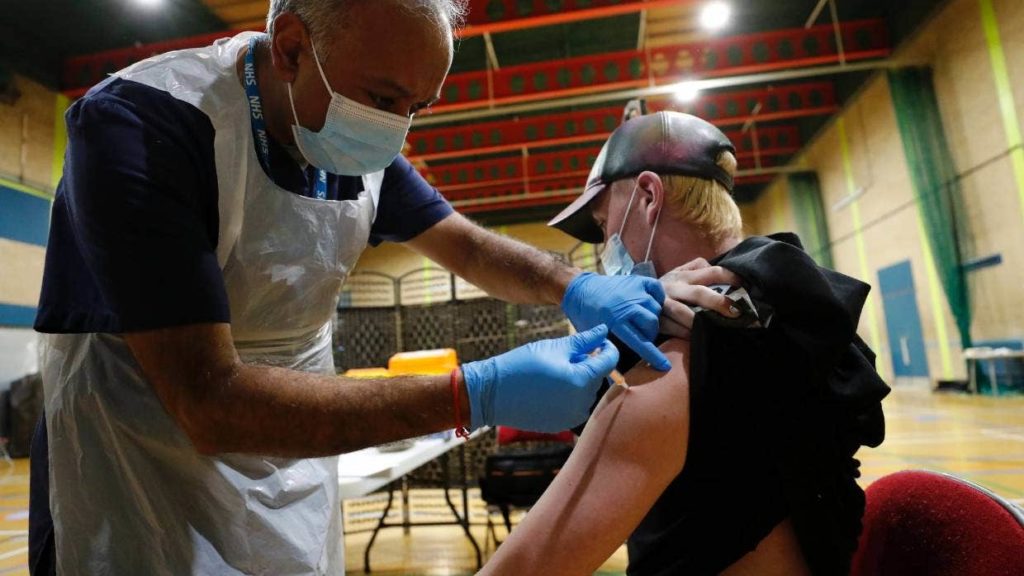 The UK’s Oxford University has released a study showing the Oxford-AstraZeneca vaccine cut transmission of the virus by two-thirds and prevented severe disease.

The study, which has not been peer-reviewed yet, also suggested that a single dose of that Covid-19 vaccine provided a high level of protection for 12 weeks.

Britain’s Health Secretary Matt Hancock said Wednesday (local time) that the study “backs the strategy that we’ve taken and it shows the world that the Oxford vaccine works effectively”.

The UK has been following a contentious strategy of delaying the second shot so it can protect more people quickly with a first dose.

Delaying the second dosage of the AstraZeneca Covid-19 vaccine by 12 weeks increases its effectiveness, according to Professor Adrian Hill from Oxford University.

Mene Pangalos, executive vice president of biopharmaceuticals research and development at AstraZeneca, said no patients experienced severe Covid-19 or required hospitalization three weeks after receiving a first dose, and that efficacy appeared to increase up to 12 weeks after the initial shot.

“Our data suggest you want to be as close to the 12 weeks as you can” for the second dose, Pangalos said during a news conference.

The study did not address dosing of the Pfizer-BioNTech vaccine, which is also in use currently in the UK.

Pfizer recommends that its shots be given 21 days apart and has not endorsed the UK government’s decision to lengthen the time between doses.

But the Oxford research was greeted with excitement by UK officials under pressure to justify their decision to delay the second dose.

“That reduction in transmission, as well as the fact there is no hospitalizations, the combination of that is very good news. And it categorically supports the strategy we’ve been taking on having a 12-week gap between the doses,” Hancock told Sky News.

Some countries, including France, have authorized the AstraZeneca vaccine only for use in people under 65, saying there is not enough evidence to say whether it works in older adults. Belgium has authorized it only for people 55 and under.

Yet one of the lead researchers on the Oxford vaccine project, Dr Andrew Pollard, said “we expect it to be highly effective in older adults” and said more data should be available in the next few weeks.

Pangalos noted that the European Medicines Agency had authorized the vaccine for use in all people over age 18.

“How individual countries decide to implement vaccines is ultimately up to them based on the vaccine supplies that they have,” he said.

Vaccine supply is a sensitive issue in the European Union, which is unhappy that AstraZeneca cut back on the number of doses it plans to supply the EU with in the near term. The company said last month that it planned to cut initial deliveries within the EU from 80 million doses to 31 million doses due to reduced yields from its manufacturing plants in Europe.

It has since applied to supply 9 million additional doses to the 27-nation bloc, whose leaders are facing criticism over what is perceived as slow progress in inoculating the population.

Britain has Europe’s deadliest coronavirus outbreak, with more than 108,000 deaths, and is in its third national lockdown as authorities try to contain a new, more transmissible virus variant first identified in southeast England.

Other variants are also a concern. Public health officials in England are going door to door, trying to test all adults in eight targeted communities in an attempt to stop a new strain first identified in South Africa from spreading further.

So far 105 cases of the variant have been identified in the UK, 11 of them in people with no links to overseas travel. Scientists say there’s no evidence the South African variant is more serious than the original virus but it may be more contagious. There are also concerns that current vaccines may be less effective against that variant because it contains a mutation of the virus’ characteristic spike protein that existing vaccines target.

That is a worry as the UK races to vaccinate its own population against the virus. Almost 10 million people have received the first of their two shots, including the bulk of people over 80 and those in nursing homes.

Pollard said Oxford scientists believe the AstraZeneca vaccine will continue to offer protection against new variants of the coronavirus, although they are still waiting for data on that.

He said even if the virus adapts “that doesn’t mean that we won’t still have protection against severe disease”.

“If we do need to update the vaccines, then it is actually a relatively straightforward process. It only takes a matter of months, rather than the huge efforts that everyone went through last year to get the very large-scale trials run,” he told the BBC.