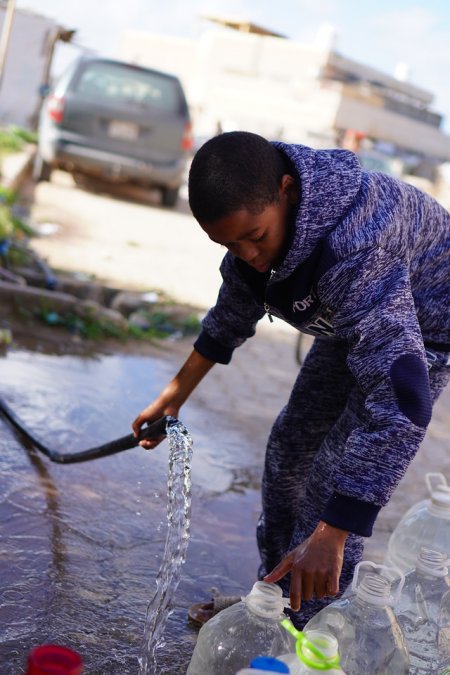 Repeated attacks on the Manmade River systems have caused about 190 wells to be rendered out of service while a general deterioration of the water network is causing a water loss of up to 50 percent.

UNICEF expresses concern over the deteriorating WASH situation in Libya. Over 4 million people, including 1.5 million children will face imminent water problems if immediate solutions are not found and implemented. The prolonged crisis has left the sector facing great challenges, leading to a significant decline in services. This is mainly attributed to the lack of required budgets for the purchase of equipment, operational materials and spare parts for regular maintenance. Suppliers are also struggling to open bank credits in hard currency to import equipment from outside the country.

The repeated attacks on the Manmade River systems caused about 190 wells to be rendered out of service (Al-Jafara – Al-Hasawna and Al-Sirir-Tazarbo), bringing this vital sector to the brink of collapse. The General Company for Water and Wastewater suffers from the deterioration of the water network, causing the loss of large quantities of water of up to 50 per cent. In the sanitation sector, only 45 per cent of households and institutions are connected to the public network; the rest are connected to cesspits, which leads to pollution of groundwater reservoirs. Furthermore, most of the wastewater is discharged directly into the sea without treatment, negatively impacting the environment and marine life.

Desalination Plants suffer from lack of equipment needed to carry out maintenance and chemicals to sustain operations, thus decreasing their operational efficiency. For instance, the Bomba Bay plant has been rendered completely out of service, depriving over 63,000 people living in the five cities – Al-Tamimi, Bambah, Ras al-Tin, Umm al-Razm, Murtaba, and the eastern coast of Derna – from access to safe water. The estimated cost for the rehabilitation of the plant is $ 12 million. This is taking place against the backdrop of the prevailing liquidity crisis that has put additional pressure on the financial ability of families to afford purchasing water by trucks, and, hence increasing their economic burden. Furthermore, the remaining 7 plants that provide water to cities of Abu Trabah, Sousa, Derna, Tubrok, Zletin, Alzawya, and Zwara are operating at 28 per cent of their design efficiency. They too will break down if no immediate intervention is undertaken.

The situation has been exacerbated by frequent power cuts and lack of fuel needed for operations. All these conditions could lead to a complete system breakdown and stop water supply and sanitation services to vulnerable families and children.