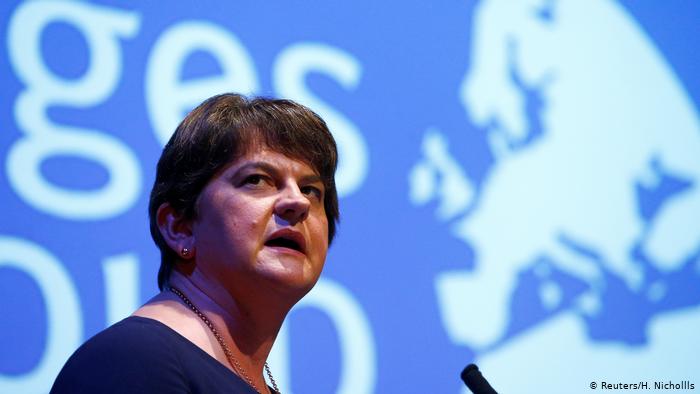 Northern Ireland’s First Minister Arlene Foster called the Northern Ireland Protocol “unworkable” after it became the focus of a spat with the EU over controls for coronavirus vaccine exports.

The head of Northern Ireland’s government on Saturday called for special Brexit rules for the Irish border to be scrapped following a row with the EU as the bloc struggles to secure coronavirus vaccine supplies.

The bloc — under pressure to secure vaccine supplies for its citizens — had  threatened late Friday to invoke Article 16 of the Northern Ireland Protocol to stop the free-flow of vaccines over the border from EU member Ireland to British-administered Northern Ireland.

But it abruptly reversed the plan just before midnight following an outcry from London, Belfast and Dublin.

“The protocol is unworkable, let’s be very clear about that, and we need to see it replaced because otherwise there is going to be real difficulties here in Northern Ireland,” First Minister Arlene Foster told BBC radio.

The leader of the loyalist Democratic Unionist Party called the EU’s attempt to use the protocol, designed to keep the Irish border open, as “an incredible act of hostility.”

“It’s absolutely disgraceful, and I have to say the Prime Minister (Boris Johnson) now needs to act very quickly to deal with the real trade flows that are being disrupted between Great Britain and Northern Ireland,” she added.

Why is the protocol important?

The Brexit deal’s Northern Ireland Protocol allows goods to flow between Ireland and Northern Ireland, which is part of the United Kingdom, without the need for customs checks at the border.

Keeping the border open is seen as crucial for preserving the delicate peace in Northern Ireland.

Achieving this, while at the same time preventing UK access to the EU’s markets through the Irish land border was one of the main sticking points of the Brexit divorce negotiations.

In a statement Friday, the European Commission clarified that the protocol would not be affected, but warned that should vaccines and active substances move out of the bloc and toward third countries —  such as the UK — it would use “all the instruments at its disposal.”

The EU’s member states are trailing behind Israel, the UK and the US in rolling out vaccines, with drug makers hit by production problems forced to delay promised deliveries.

The European Commission has voiced concerns that vaccine doses could be sent abroad before companies fulfill their obligations in the bloc. As a result, it’s planning a ban on vaccine exports produced in the EU to ensure its own supplies.