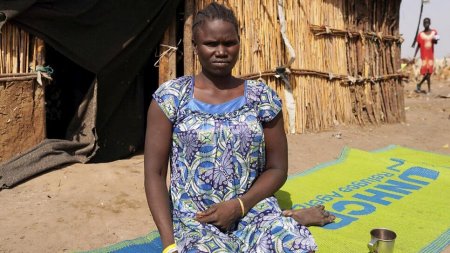 More than 200,000 South Sudanese refugees have returned from countries of asylum in the past two years, encouraged by news from friends and family that peace is slowly returning to their country.

When Mary Nyekuola first returned to South Sudan after fleeing conflict four years ago, she wept. The land she left behind had been occupied and her husband had died while a refugee in Khartoum after a long illness. She had to start from scratch, but still, it felt good to be back.

“I had mixed feelings. It was painful but at the same time I was happy to be home,” she said as she spread a mat on the ground outside her sister’s house in Bentiu, a small town in Unity State near the border with Sudan.

Mary is among more than 200,000 South Sudanese refugees who have returned from countries of asylum in the last two years, encouraged by news from friends and family that peace is slowly returning to their country.

The 30-year-old mother lives with a disability and moves around with the aid of a wheelchair and her niece. Her young children sometimes push her along an uneven, dry and dusty path to look for water.

“When I left, it was because I could not walk and I would not have been able to run from fighting, but things are better now,” she said.

South Sudan seceded from Sudan to become the world’s youngest nation in 2011 after decades of war, but plunged back into conflict in 2013. More than four million South Sudanese have been displaced across the region and within their own country in one of Africa’s largest displacement crises.

A renewed agreement on the resolution of the conflict in the Republic of South Sudan’ signed in September 2018 by warring parties cautiously revived hopes of long-term stability, a necessity for lasting solutions to displacement, including return and local integration.

Visiting the country to observe the opportunities and challenges of the fragile peace process, UN High Commissioner for Refugees Filippo Grandi met with government officials, refugees, internally displaced people, host communities and those who have recently returned, like Mary.

“We have seen an increase in numbers of people returning, there has been a decline during the peak of the pandemic but now it is picking up again,” he said.

At Panakuach, a border point between Sudan and South Sudan, he met returning refugees travelling in buses packed high with beds, mattresses and other belongings accumulated during their time in Khartoum, Sudan’s capital. UNHCR, the UN Refugee Agency, has a non-return advisory in place as the conditions in South Sudan are not yet in place for safe and lasting return, but Grandi urged more strategic thinking by the government to help returnees and the communities they settle in live in safety and dignity.

“There is a slow paradigm shift linked to the peace process to a better situation, but the challenges are enormous … authorities must firmly commit to security, rule of law and good governance.” Grandi also called for the international community to help strengthen development efforts to make sure schools, health services and work opportunities are serving the people.

Years of conflict in South Sudan have severely damaged basic infrastructures and stretched humanitarian aid. He called for special attention to be paid to the security and needs of the country’s women, like Mary, who have borne the brunt of horrific violence and trauma during the country’s civil war.

“Women have suffered enough in this country, “said Grandi. “We met many women who told us they are the ones who are leading their families back to returning home, they’re the ones who need more reassurance about security, about education of the children, about health and about their own livelihoods, wondering how they will live.”

The High Commissioner’s visit comes at a time of gathering momentum for a push by the Intergovernmental Authority on Development – an eight-country regional trade bloc – to identify lasting solutions for some seven million forcibly displaced people originating from and within South Sudan and Sudan.

Grandi praised South Sudan’s open-door policy for refugees and the continued display of generosity and solidarity toward the nearly 300,000 refugees currently present on its soil, especially at a time when the country is experiencing enormous socio-economic, security and political challenges.

The coronavirus pandemic has further deepened the plight of people fleeing war, conflict and persecution and vulnerable South Sudanese, and UNHCR’s humanitarian support will continue. Asked whether she is concerned that conflict could return to her hometown, Mary says she worries, but for now is willing to take a chance.

“I am still afraid, I am with my children, I don’t know if the peace will last. If fighting starts again, we will run away. But it has only been a few months, maybe after a year or two years we will see.”

She wants to start a business so she can take care of her family and needs capital. “If I am given a tea shop with items like sugar, sweets and others. My niece and I can run the shop.”