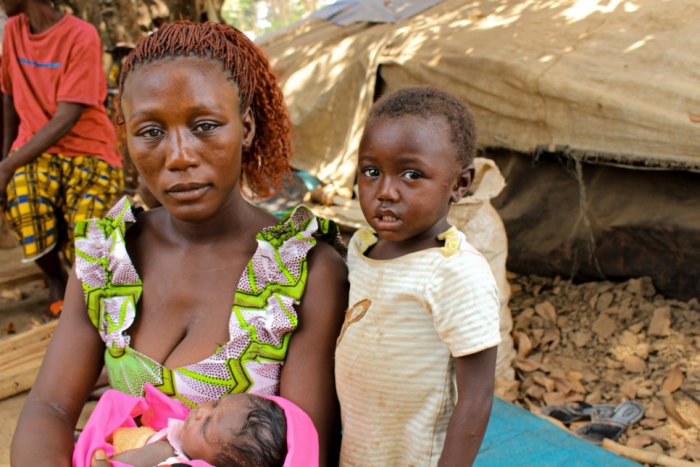 As insecurity in the Central African Republic (CAR) has displaced more than 200,000 people within the country and in neighboring states in less than two months, UNHCR, the UN Refugee Agency, is warning that tens of thousands are facing dire conditions.

Refugee arrivals into the Democratic Republic of the Congo (DRC) have reached 92,000 according to local authorities and some 13,240 people have crossed into Cameroon, Chad, and the Republic of Congo, since violence erupted in December 2020 ahead of CAR’s general elections. Refugees continue to arrive.

Some 100,000 people remain internally displaced inside CAR, according to figures compiled by the United Nations Office for the Coordination of Humanitarian Affairs (OCHA).

The continuing volatility has hampered the humanitarian response and made access to the internally displaced more difficult. The main road used to bring supplies has also been forced shut.

Armed groups are reportedly present in the Batangafo and Bria sites where displaced communities are sheltering, in violation of the humanitarian and civilian nature of those sites. Such presence poses a grave protection risk for those displaced, from risk of forced recruitment to restriction of movement to extortion or threats.

In the DRC, new arrivals have crossed the Ubangi, Mbomou, and Uele rivers that form the country’s natural border with CAR and into 40 localities in the provinces of North Ubangi, South Ubangi, and Bas Uele.

Refugees have told UNHCR that they fled in panic when they heard gun shots, leaving their belongings behind.

Most refugees are living in dire conditions in remote, hard-to-reach areas close to the rivers without basic shelter and facing acute food shortages. They are dependent on catching fish and on what the local villagers can spare. Unfortunately, the host communities in these remote areas have extremely limited resources.

For many, the river is also the sole water source for drinking, washing, and cooking. Malaria, respiratory tract infections, and diarrhea have become common among the refugees. UNHCR partners are treating patients and distributing medicine but the needs are mounting.

UNHCR is biometrically registering up to 1,000 new arrivals per day, which enables the early identification of people with vulnerabilities. UNHCR is working closely with the government, is scaling up registration activities, and will update the population figures based on actual registrations.

UNHCR is pre-positioning emergency supplies in Yakoma, North Ubangi province, before vast areas become inaccessible by road with the looming rainy season. In six weeks, the rains will prevent the delivery of assistance to refugees in Bas Uele and North Ubangi unless supplies are airlifted at considerable cost for which UNHCR must raise funds.

Funding for UNHCR’s humanitarian response is already critically low and under severe pressure as the numbers of refugees and their needs have continued to increase. Our funding requirements for the CAR Situation in 2021 amounts to US$151.5 million and is just two per cent funded. Needs are likely to grow with the new displacement.

UNHCR is urgently appealing to the international community to mobilize funds, so humanitarian organizations can deliver life-saving assistance to the Central African refugees and their hosts.