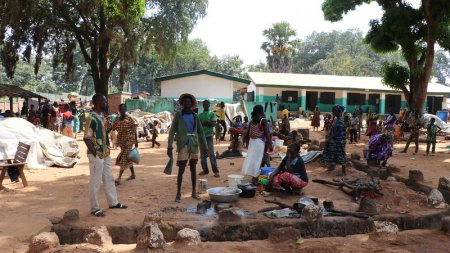 The Humanitarian Coordinator calls on all parties to abide by IHL and to protect civilians, civilian infrastructure, and humanitarian personnel. She also appeals to donors to scale up funding.

The Humanitarian Coordinator in the Central African Republic, Ms. Denise Brown, expresses her serious concern for the escalation of tensions and the upsurge of violence that has been observed in several parts of the country ahead of upcoming general elections on the 27th of December. Insecurity and fears of attacks have already panicked the population and led to over 55,000 people leaving their homes, which serves to increase their vulnerability.

Armed elements have also increased their threats and attacks against humanitarian actors who remain dedicated to supporting the people of the Central African Republic. In the past week alone, over 17 incidents against humanitarian personnel and assets have been recorded. In addition, an ambulance and a vehicle from a health district were carjacked and one health personnel injured. This situation has prevented hundreds of thousand people in the west and center of the country from receiving urgent assistance, particularly in the area of health.

“I strongly condemn these acts of violence which serve to increase the suffering and the trauma of the people of the Central African Republic, and I call on armed elements to immediately stop all attacks against humanitarian personnel and to abide by their obligations under International Humanitarian Law and to protect civilians and civilian infrastructure”, declared the Humanitarian Coordinator.

“Humanitarian actors continue to remain in the communities alongside the population despite the violence, which must stop,” said Ms. Brown.