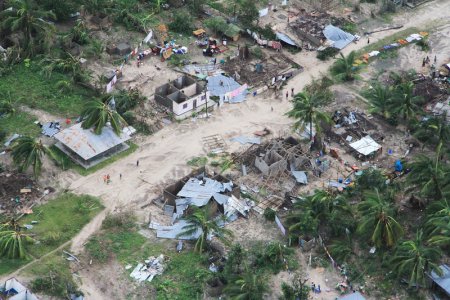 This insurance product will provide countries with predictable and rapid financing for early response to cope with emergency situations caused by tropical cyclones.

The African Risk Capacity (ARC) Group is proposing a new insurance mechanism to African countries in the South West Indian Ocean (SWIO) region to cope with the devastating effects of the tropical cyclones. This parametric insurance product will provide countries with predictable and rapid financing for early response to cope with emergency situations caused by tropical cyclones. The mechanism is a significant milestone to building resilience to climate-related disasters on the African continent.

The Southwest Indian Ocean Region (SWIO) region is one of the most active areas globally in terms of tropical cyclone formation. On average, thirteen cyclone events with wind speeds above 63 km/h and possibly exceeding 200 km/h, occur each year in the SWIO region. High wind speeds are a key factor contributing to damages from tropical cyclones.

Developments in the SWIO region in 2019, including the devastating effects of cyclones Idai and Kenneth in Mozambique, led to a renewed country interest in parametric tropical cyclone insurance coverage. Consequently, ARC developed a model capable of accurately estimating the risk and economic losses due to tropical cyclone events adapted to the SWIO countries such as Mozambique, Madagascar, Comoros, Mauritius, Seychelles, and Tanzania.

“Our goal is to continue to diversify our product offering to meet the needs of our Member States effectively. This new offer will allow our Member States to better anticipate and manage extreme weather events while ensuring that their impact on the population is mitigated, ” stated UN-ASG and African Risk Capacity Group Director-General, Ibrahima Cheikh Diong.

Madagascar became the first country in the region to take out the ARC tropical cyclone parametric insurance coverage, thanks to the KfW premium support for the 2020-2021 season. Madagascar’s participation will complement government efforts towards reducing the impacts of climate change and weather variability on the most vulnerable populations.

Indeed, Madagascar, the largest island in Africa, is naturally prone to cyclones. According to UNOCHA, an average of 1.5 cyclones affect Madagascar each year, the highest number in Africa, and each severe cyclone affects an average of 700,000 people.

“As part of the implementation of the national policy on disaster risk management, Madagascar has subscribed to the new insurance product against Tropical Cyclones offered by the ARC Group to better protect the population against the enormous damage caused by extreme climatic events but also allow the country to recover quickly when affected by cyclones,” declared H.E. Richard Randriamandrato, Minister of the Economy and Finance, Republic of Madagascar.