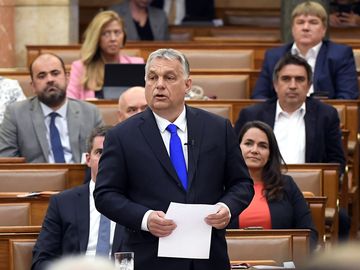 Hungary has illegally detained asylum seekers and moved them to a border area, the EU Court of Justice in Luxembourg said Thursday.

EU judges in May ruled that Hungary can’t hold asylum seekers indefinitely in a transit area on the county’s border with Serbia, adding that applicants should also have the right to a judicial review. The European Commission sued Hungary in December 2018 over the policy in the latest case, arguing it violates guarantees provided to asylum seekers in EU law.

Following the court’s decision in May, Hungary closed the contested transit zones and end a practice where people were held in metal containers, and in some cases without food. Still, the government further tightened its rules for people seeking asylum in the future.

The Hungarian government has labeled Serbia, a non-EU nation, a “safe transit country” for refugees and therefore automatically rejects asylum seekers entering from there. It has also maintained that asylum seekers are free to leave to go back to Serbia and hence rejected arguments that refugees were in detention.