KMA Landed In Court For Demolishing Properties Worth of Ghc450, 000: But Complainant Expressed Worry Over Delay of Case. 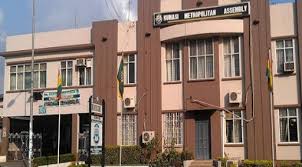 A case between a businessman, Reinhardt Apollos and Kumasi Metropolitan Assembly has been adjourned once again to 16th February 2021, but complainant expressed worry about the delay of case.

In January 2015, Mr Apollos applied for a building permit from the KMA through the Bantama Sub-Metro to enable him construct toilet facility, bathhouse and urinal at the Race Course market of which permit was granted to him by the Sub-Metro and the said facilities were constructed at an estimated cost of Ghc450, 000.

According to Mr. Apollos, the KMA Boss came to him (Apollos) in 2017 in accompany with the Regional Coordinating Director that they wanted to build a similar facility on the same land he is occupying or agree to share any income that will generate from the facilities but Apollos refused allegedly.
‘’Since then, according to him, he started having problems with the KMA boss’’.
The complainant further alleged that the KMA Mayor later sent some people to him in demand of Ghc20, 000 to allow him (Apollos) operate but he refused again.

In a few days after he refused to oil the hands of the KMA officials, they came back and leveled three trips of sand, 3,000 building blocks and trips of chippings without his notices.

He explained lengthily that after the demolishing, monies were stolen from the warehouse and his Wife invoked curse on those who took the money. When the matter was reported at the Manhyia Palace, she was asked to pay 20 sheeps and schnapps to re-invoke the curse. Adding, he made enquiries to authenticate the source of the graving of the land, and it was revealed that the KMA boss sanctioned the actions on his properties.

In two weeks later according to the complainant, they came back with instructions from the mayor and demolished a warehouse, 16-seater toilet facility, and bathhouse worth Ghc450, 000.00 rendered the businessman with absolutely nothing.

To enable Mr Reinhardt Apollos seeks redress to his predicaments; he petitions the Attorney General, Hon Yindiok Kpemka on 6 July 2017 seeking his jurisdiction to help him claim Justice.
That notwithstanding, Apollos went ahead and organized a press conference in his quest to inform the public about the conduct of the KMA boss and his staffs towards him.

The complainant alleged further that after the press conference, the mayor mute all journalists that took part in the said press conference and oil their hands not to publish the story.

When further Checks conducted to authenticate his claims reveal that some of the journalists that took part, in the said press conference, confirmed that the mayor asked them not to air the story that’s why they didn’t publish it.
Out of the over 30 media houses that took part, Apollos again alleged that only Metro TV that hastily run-over the story.
When efforts to resolve his concerns through the above mentioned avenues failed, Apollos finally filed the case at the Human Rights Court- 8 in Kumasi on the 12th May, 2019. Adding, when the case was filed, KMA failed to respond and the court decided to pass judgment until they later opened defense and the court slaps them with an amount of Ghc1, 500.00
Court proceedings, he said, started on the 25th October 2020 presided over by Justice, Krofa Akonoba Addai but the case was adjourned from 8th to 14th December 2020 and again adjourned to 16th February 2021.
The complainant said he has confidence in the court that it deliver fair judgement coming 16th February 2021 But it long delay is affecting it process.