The strange case of Portugal’s returnees 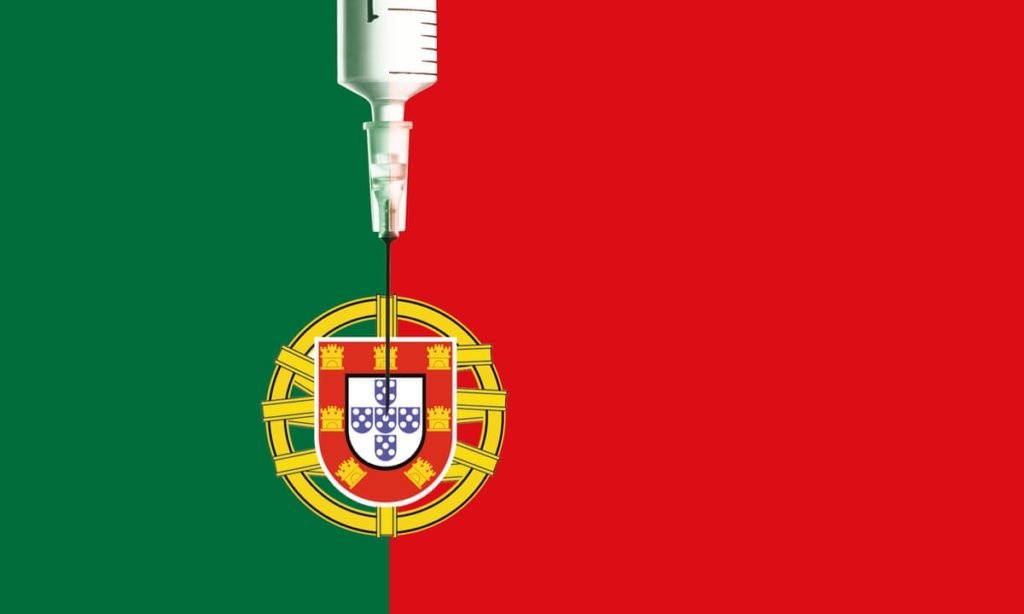 White settler returnees to Portugal in 1975, and the history of decolonization, can help us understand the complicated category of refugee.

he year is 1975, and the footage comes from the Portuguese Red Cross. The ambivalence is there from the start. Who, or maybe what, are these people? The clip title calls them “returnees from Angola.” At Lisbon airport, they descend the gangway of a US-operated civil airplane called “Freedom.” Clothes, sunglasses, hairstyles, and sideburns: no doubt, these are the 1970s. The plane carries the inscription “holiday liner,” but these people are not on vacation. A man clings tight to his transistor radio, a prized possession brought from far away Luanda. Inside the terminal, hundreds of returnees stand in groups, sit on their luggage, or camp on the floor. White people, black people, brown people. Men, women, children, all ages. We see them filing paperwork, we see volunteers handing them sandwiches and donated clothes, we see a message board through which those who have lost track of their loved ones try to reunite. For all we know, these people look like refugees. Or maybe they don’t?

Returnees or retornados is the term commonly assigned to more than half-a-million people, the vast majority of them white settlers from Angola and Mozambique, most of whom arrived in Lisbon during the course of 1975, the year that these colonies acquired their independence from Portugal. The returnees often hastily fled the colonies they had called home because they disapproved of the one party, black majority state after independence, and resented the threat to their racial and social privilege; because they dreaded the generalized violence of civil war and the breakdown of basic infrastructures and services in the newly independent states; because they feared specific threats to their property, livelihood, and personal safety; or because their lifeworld was waning before their eyes as everyone else from their communities left in what often resembled a fit of collective panic.

Challenged by this influx from the colonies at a time of extreme political instability and economic turmoil in Portugal, the authorities created the legal category of returnees for those migrants who held Portuguese citizenship and seemed unable to “integrate” by their own means into Portuguese society. Whoever qualified as a returnee before the law was entitled to the help of the newly created state agency, Institute for the Support of the Return of the Nationals (IARN). As the main character of an excellent 2011 novel by Dulce Maria Cardoso on the returnees states:

The legal category “returnee” policed the access to this manna-from-welfare heaven, but the label also had a more symbolic dimension: calling those arriving from Angola and Mozambique “returnees” implied an orderly movement, and possibly a voluntary migration; it also suggested that they came back to a place where they naturally fit, to the core of a Portuguese nation that they had always been a part of. In this sense, the term was also meant to appeal to the solidarity of the resident population with the newcomers: in times of dire public finances, the government hoped to legitimize its considerable spending on behalf of these “brothers” from the nation’s (former) overseas territories.

Many migrants, however, rebutted the label attached to them. While they were happy to receive the aid offered by state bureaucracies and NGOs like the Portuguese Red Cross, they insisted that they were refugees (refugiados), not returnees. One in three of them, as they pointed out, had been born in Africa. Far from returning to Portugal, they were coming for the first time, and often did not feel welcome there. Most felt that they had not freely decided to leave, that their departure had been chaotic, that they had had no choice but to give up their prosperous and happy lives in the tropics. (At the time, they never publicly reflected on the fact that theirs was the happiness of a settler minority, and that prosperity was premised on the exploitation of the colonized.) Many were convinced they would return to their homelands one day, and many of them proudly identified as “Angolans” or “Africans” rather than as Portuguese. All in all, they claimed that they had been forcibly uprooted, and that now they were discriminated against and living precariously in the receiving society—in short, that they shared the predicaments we typically associate with the condition of the refugee.

Some of them wrote to the UNHCR, demanding the agency should help them as refugees. The UNHCR, however, declined. In 1976, High Commissioner Prince Aga Khan referred to the 1951 Refugee Convention, explaining that his mandate applied “only to persons outside the country of their nationality,” and that since “the repatriated individuals, in their majority, hold Portuguese nationality, [they] do not fall under my mandate.” The UNHCR thus supported the returnee label the Portuguese authorities had created, although high-ranking officials within the organization were in fact critical of this decision—in the transitory moment of decolonization, when the old imperial borders gave way to the new borders of African nation-states, it was not always easy to see who would count as a refugee even by the terms of the 1951 Convention.

In short, the strange case of Portugal’s returnees—much like that of the pieds-noirs, French settlers “repatriated” from Algeria—points to the ambiguities of the “refugee.” In refugee studies and migration history, the term defines certain groups of people we study. In international law, the category bestows certain rights on specific individuals. As a claim-making concept, finally, “the refugee” is a tool that various actors—migrants, governments, international organizations, NGOs—use to voice demands and to mobilize, to justify their politics, or to interpret their experiences. What are we to make of this overlap? While practitioners of the refugee regime will have different priorities, I think that migration scholars should treat the “refugee” historically. We need to critically analyze who is using the term in which ways in any given situation. As an actor’s category, “refugee” is not an abstract concept detached from time and place, context, and motivations. Rather, it is historically specific, as its meanings change over time; it is relational, because it is defined against the backdrop of other terms and phenomena; and it is strategic, because it is supposed to do something for the people who use the term. The refugee concept is thus intrinsically political.

Does analyzing “the refugee” as an actor’s category mean that we must abandon it as an analytical tool altogether? Certainly not. We should continue to research “refugees” as a historically contested category of people. While there will always be a tension between the normative and analytical dimensions, historicizing claims to being a “refugee” can actually strengthen the concept’s analytical purchase: it can complicate our understanding of forced migrations and open our eyes to the wide range of degrees of voluntariness or force involved in any migration decision. It can help us to think the state of being a refugee not as an absolute, but as a gradual, relational, and contextualized category. In the case of the returnees, and independently from what either the migrants or the Portuguese government or the UNHCR argued, such an approach will allow us to analyze the migrants as “privileged refugees.”

Let me explain: For all the pressures that pushed some of them to leave their homes, for all the losses they endured, and for all the hardships that marked their integration into Portuguese society, the returnees, a privileged minority in a settler colony, also had a relatively privileged experience of (forced) migration and reintegration when colonialism ended. This becomes clear when comparing their experience to the roughly 20,000 Africans that, at the same time as the returnees, made it to Portugal but who, unlike them, were neither accepted as citizens nor entitled to comprehensive welfare—regardless of the fact that they had grown up being told that they were an integral part of a multi-continental Portuguese nation, and despite that they were fleeing the same collapsing empire as the returnees were. Furthermore, we must bear in mind that in Angola and Mozambique, hundreds of thousands of Africans were forcibly displaced first by Portugal’s brutal colonial wars (1961-1974), then during the civil wars after independence (1975-2002 in Angola, 1977-1992 in Mozambique). Unlike the returnees, most of these forced migrants never had the opportunity to seek refuge in the safe haven of Portugal. Ultimately, the returnees’ experience can therefore only be fully understood when it is put into the broader context of these African refugee flows, induced as they were by the violent demise of settler colonialism in the process of decolonization.

So, what were these people in the YouTube clip, then? Returnees? Or African refugees? I hope that by now you will agree that … well … it’s complicated.