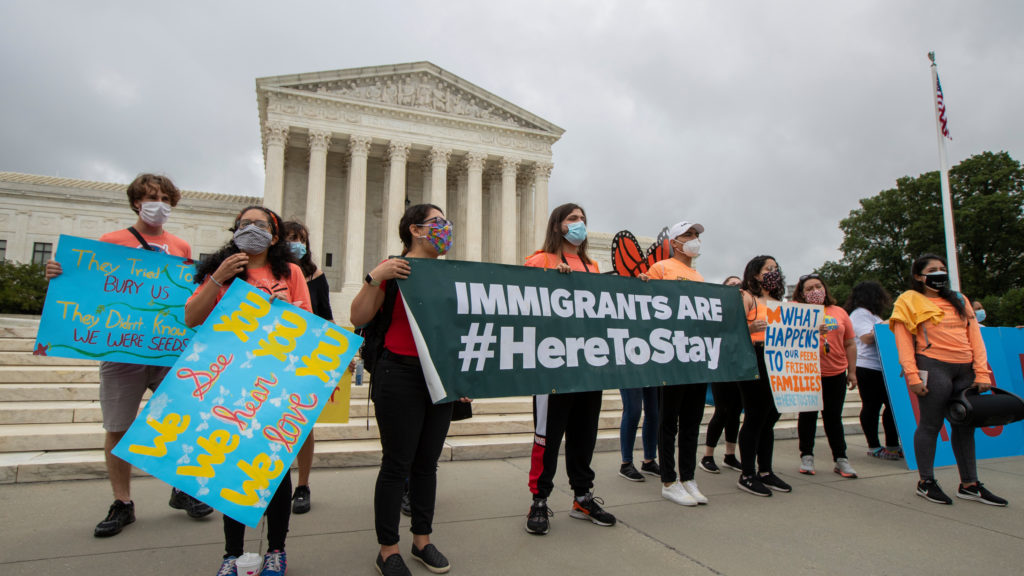 In this June 18, 2020, photo, Deferred Action for Childhood Arrivals (DACA) students celebrate in front of the Supreme Court after the Supreme Court rejected President Donald Trump's effort to end legal protections for young immigrants in Washington. Less than five months from Election Day, President Donald Trump is positioning himself as the spokesman for voters resisting a new wave of cultural change, ready to ride any backlash from the protests calling for racial equality and police reform and this week’s Supreme Court rulings extending protections to gay workers and young immigrants. (AP Photo/Manuel Balce Ceneta)
Share
Facebook Twitter LinkedIn Pinterest Email

The Trump administration has fully restored the Obama-era DACA program for immigrants brought to the U.S. as youth, complying with a federal judge’s order.

The Trump administration has fully restored the Obama-era Deferred Action for Childhood Arrivals program for immigrants brought to the U.S. as youth, complying with a federal judge’s order.

The Department of Homeland Security posted on its website Monday that it is accepting new applications, petitions for two-year renewals as well as requests for permission to temporarily leave the U.S.

The department said it “may seek relief for the order,” signaling that its concession to the court order may be short-lived if its legal effort succeeds.

The announcement is still a major victory for young people who have been unable to apply since Trump ended DACA in September 2017. His administration has long argued that DACA is unconstitutional.

After the U.S. Supreme Court ruled in June that Trump had violated federal law in how he ended the program, the Department of Homeland Security announced that it would only accept renewal applications for one-year permits instead of the original two years. DACA currently shields about 650,000 people from deportation and makes them eligible for work permits.

U.S. District Judge Nicholas Garaufis in the Eastern District of New York on Friday ordered DHS to post a public notice within three days – by Monday – that it would accept applications under the original terms of the program. Garaufis has ruled that Chad Wolf, the acting secretary of homeland security, was unlawfully serving in his position.

On Friday, the judge said that finding meant Wolf’s memo restricting DACA applications was invalid. DHS spokesman Chase Jennings said Saturday that the department “wholly disagrees with this decision by yet another activist judge,” but added that it “will abide by this decision” while working on an appeal.

DACA was started in 2012 during the Obama administration. It allows certain immigrants who were brought to the country illegally as children to work and be generally exempt from deportation, though the program does not confer legal status on recipients. People approved for the program must pass background checks and remain eligible in order to renew.

President-elect Joe Biden has pledged to reinstate DACA when he takes office in January. Advocates have called for congressional action to legalize people eligible for DACA as well as others among the 11 million immigrants living in the U.S. illegally.

Maria Garcia, 18, an aerospace engineering student at Arizona State University in Tempe, said she will apply for the program as soon as she can. She and her parents and two brothers arrived in Phoenix in 2006 from Aguascalientes, Mexico. Her older brother, now 23, is already a DACA recipient and has a job. Her younger brother, now 16, is in high school and plans to eventually seek DACA protection as well.

“There are a lot of other students who are undocumented who don’t qualify for DACA. They have to find a permanent solution,” she said.