How the Rohingya became lonely refugees of Bangladesh 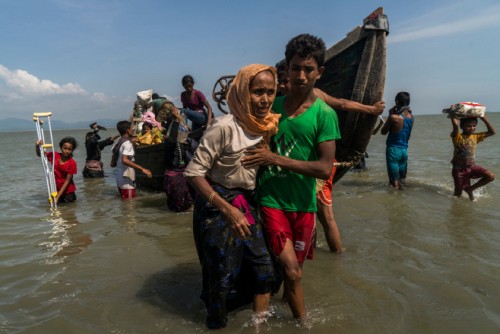 The Rohingya are one of Myanmar’s ethnic minorities that have been ill-treated to the extent that the United Nations and the international community defined them as an “example of ethnic cleansing.” The Myanmar government claims that the Rohingya people do not historically belong to its country of 135 national races. The Rohingya has been equally unwelcomed by Bangladesh. AsiaToday will now take a look at ethnic minorities in Asia under the theme, ‘Asia We Haven’t Seen.’ The first episode focuses on Myanmar’s Rohingya.>

Recently, the first group of nearly 1,600 Rohingya refugees boarded seven Bangladeshi naval vessels in the port of Chittagong for the trip to Bhashan Char, or floating island.

The move came after the Bangladesh government, concerned with nearly one million Rohingya refugees in the country, decided to relocate them to the floating island in order to ease overcrowding at existing refugee camps.

AFP reporters said the Bangladeshi government has spent some $400 million on the island to establish residential facilities with supply of electricity and water, as well as agricultural plots, mosques, hospitals, police station, learning centers, and more.

However, human rights groups have raised concerns that many travelling to the island were being moved against their will and that Bhashan Char is a silt island prone to flooding and in the path of cyclones that frequently wreak havoc in the region. Amnesty International urged Bangladesh to stop relocation of Rohingya refugees, saying, “It is crucial that the Bangladesh authorities must let the UN, rights groups and humanitarian agencies carry out independent assessments of Bhashan Char’s habitability first before taking any steps to relocate people there.”

The Bangladeshi government is in a difficult situation. In late August 2017, more than 700,000 Rohingya Muslims were forced to flee to Bangladesh after a deadly crackdown by Myanmar’s army. They began gathering in Cox’s Bazar, a district in Bangladesh, and surrounding refugee camps. The number of refugees increased to 1 million, raising human rights concerns over poor conditions of the refugee camps as well as potentially severe impact of COVID-19 in the densely populated refugee settlements.

What caused 700,000 Rohingya civilians to flee to Bangladesh from Myanmar? In August 25, 2017, a group called the Arakan Rohingya Salvation Army (ARSA) launched attacks on border police posts in Rakhine State in Myanmar. The Myanmar military immediately designated ARSA as a terrorist group and launched a sweep-up operation, killing about 1,000 people, forcing hundreds of thousands of Rohingya to cross the border and flee to Bangladesh.

Although not directly mentioning the Rohingya, Myanmar’s civilian leader Aung San Suu Kyi said, “The initial cause of events leading to the humanitarian crisis in Rakhine is the danger of terrorist activities.” At that time, over 10,000 Rohungya were killed or raped by Myanmar military police and Buddihist militias, but she blamed the Rohingya. The United Nations later described the massacre as a “textbook example of ethnic cleansing”.

ARSA was formed in 2012 following a rape of a Buddhist woman allegedly by Muslim men. As a result, more than 100,000 Rohingya people became refugees. But as they were ignored by neighboring countries, ARSA was formed mainly composed by angered young Rohingya men.

In 2017, Bangladesh and Myanmar agreed to repatriate all the Rohingya refugees within 2 years. However, as the Rohingya opposed to go back to Myanmar due to safety and citizenship guarantee concerns, the repatriation plan has become uncertain. The UN’s human rights chief Zeid Ra’ad Al Hussein warned that Myanmar’s persecution of the Rohingya minority has the potential to spark regional conflict. Numerous human rights groups and the international community are calling for a solution to the Rohingya refugee issue, but the minority group is still facing existential challenges amid the pandemic.