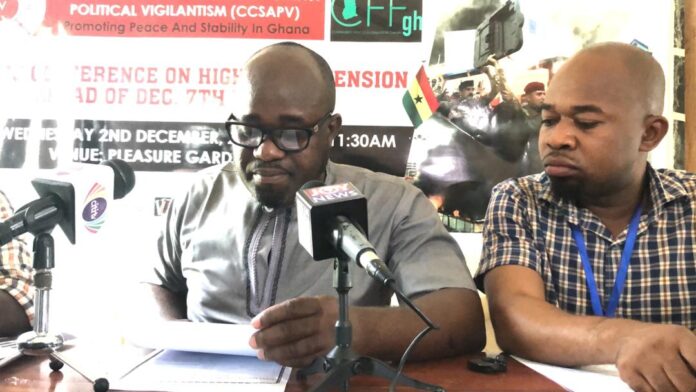 The Coalition of Civil Society Organizations against political vigilantism has blamed President Akufo-Addo for the recent violent political activities in the country.

According to the group, President Akufo-Addo has been silent and refused to implement the the recommendations of the Emile Short Commission of Inquiry, a situation that has emboldened such individuals who engage in political violence and vigilantism in the country.

The group also cited reported violence and killing of a young teacher in Banda during the recent Voter registration exercise noting that “all these have gone by without the perpetrators being brought to book.”

Speaking at a media engagement in Ho on Wednesday, 2nd November, 2020 Chairperson for the Coalition, Ebenezer Fenuku said the continuous lack of action from President Akufo-Addo is giving rise to incidences of violence ahead of Monday’s general elections.

He said, “Ghana has enjoyed uninterrupted governance since the country returned to constitutional rule in 1992. The nation has since had seven successive elections resulting three peaceful handingovers from one political party to another -2001, 2009 and 2017.

However, none if these elections have seen preceding incidences of violence and heightening tension as we are witnessing prior to this year’s impending presidential and parliamentary elections on December, 7th.”

He added that, “The Coalition of CSOs Against Political Vigilantism has undoubtedly noted that the most prevalent violation that is giving rise to the tensed political atmosphere largely stem from the deafening silence of the siting President, Nana Addo Dankwa Akufo-Addo on electoral violence that occurred under his regime which apparently establishes his tacit approval of the actions and inactions of political vigilante activities in the country.”

While calling on the President to speak and assure Ghanaians that he’ll supervise a peaceful elections, the group further stated that the country would hold President Akufo-Addo responsible should the Monday December 7th, polls record any form of violence.

“We will hold our President responsible should there be any violence during the December 7 general elections. We made several calls to the President to take action on the recommendations of the Emile Short Commission on the Ayawaso West Wuogon by-election. But nothing was done about prosecuting people.”

“We are afraid that such perpetrators may be emboldened, straightened, and motivated to cause mayhem on December 7. We are thus calling on the president to openly condemn such acts and assure us that he will supervise a very peaceful election.”

The Emile Short Commission of inquiry in a report recommended the criminal prosecution of a national security operative who slapped the Member of Parliament for Ningo-Prampram, Sam George, during the Ayawaso West Wuogon by-election.

But the government rejected portions of the recommendation, explaining in a white paper that a prosecution will not be necessary because there was a valid defence of provocation.

On Friday however, both President Nana Addo Dankwa Akufo-Addo and leader and flagbearer of the opposition NDC, John Dramani Mahama signed a peace pact to assure Ghanaians of their commitment to the conduct of peaceful elections.

The two leaders also assured Ghanaians of their readiness to accept the verdict of the elections on Monday, whichever way it goes.