I’m a Professor from an Immigrant Family. Please Stop Telling Me That My University Is Racist 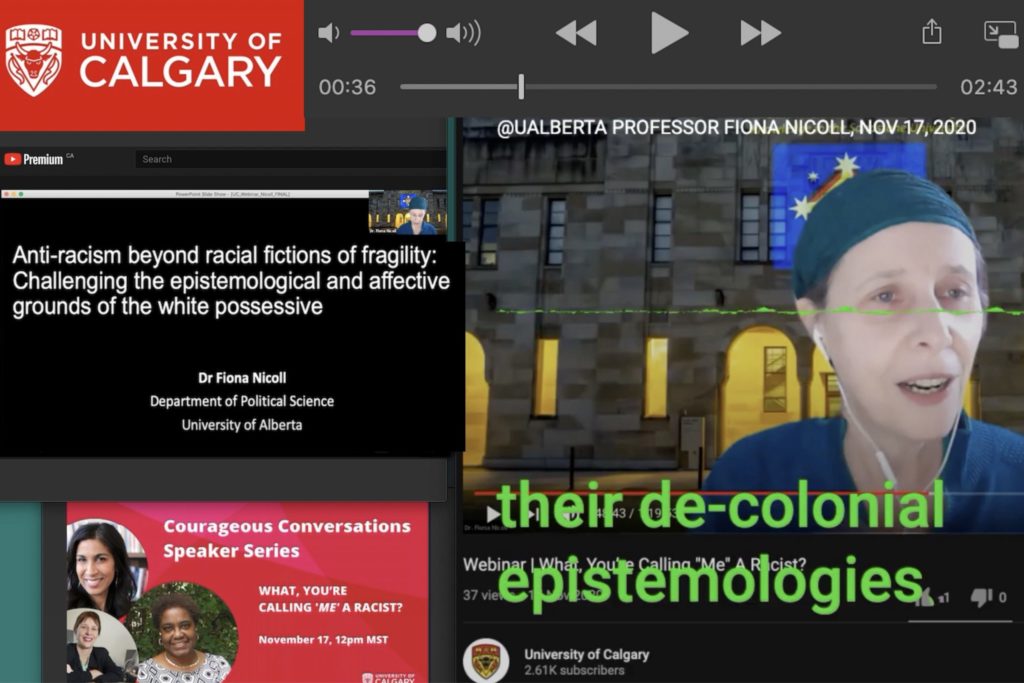 On June 24th, the University of Calgary leadership team published its response to an open letter, dated June 9th, from hundreds of students, alumni, and faculty. The original letter had called on the university to make a series of anti-racist statements, and commit to a series of actions to address racism on campus. The specific statements and actions were helpfully catalogued in the open letter.

While the university president declined to give details on his plan of action, he declared in his June 24th response that “it is no longer adequate to simply not be racist, it is time to be anti-racist”; and that “systemic racism exists, and we allow it to live on when we fail to address it meaningfully and with urgency. There is systemic racism at UCalgary, and it is incumbent upon us to tackle this challenge with vigour and purpose.”

This is all very familiar. In recent months, we have seen countless organizations re-affirm their commitment to equity, diversity, and inclusion (EDI), tout all the good work they have already done in these areas, while issuing a self-flagellating mea culpa in regard to how much more learning, listening, and understanding they still have to do. This cookie-cutter executive-speak has become predictable, almost as if it were written by the same small set of well-paid communications consultants. It is just the right mix of virtue signaling and self-abasement, offered in the hope that these organizations will be temporarily spared by the mob.

I’m from an immigrant family, and a proud faculty member at the University of Calgary, a large post-secondary institution in the province of Alberta. And I take issue with the university’s response.

Before I expand on this, I want to give some credit where it’s due: The campaign to achieve social justice, in its original form, at least, was well-intentioned. Moreover, the quality of self-reflection, and the freedom to criticize institutions from within without fear of retribution, are important components of our Enlightenment tradition. They help explain why our democratic institutions have stood the test of time. An acknowledgment of one’s shortcomings can make for a humbling and worthwhile exercise, both personally and institutionally. We stress-test ourselves, and become stronger as a result.

But if taken to an extreme, through a relentless focus on one’s faults without any sense of proportionality, one risks engaging in rituals that are merely self-destructive and performative. I worry that we are exhibiting this pattern—a sort of neurotic inferiority complex on a communal scale—in which we acquiesce reflexively to hyperbolic (and often false) claims to the effect that our societies are uniquely and unremittingly racist, even now, in the 21st century. These claims are especially dubious in regard to our university campuses, which contain some of our most liberal and tolerant subcultures.

In 2020, the principle of free expression seems to apply robustly to any critique aimed at dismantling our institutions in the name of social justice—but not so much to words spoken in defence of those institutions. As a University of Calgary professor in the sciences, I am choosing to write this letter under a pseudonym because I know that the views expressed herein, while widely shared, would lead to professional reprisals. Indeed, they could even end my career if my real name were used. My colleagues have the same fear about speaking out. If the mob came after us for expressing these common-sense ideas about campus life, I doubt the university would protect us.

Simply put: The University of Calgary is not systemically racist. And administrators likely know this, too, even if they are required to say the opposite. Yes, there are repugnant racists in our society—including, no doubt, on my university campus. But despite the frequent claims of widespread and virulent systemic racism, the most outspoken organizations never seem to provide any evidence other than disparities in outcomes (which, if taken at face value, suggest that whites are being oppressed by Asians). The causal relationship between bigotry and performance disparities is simply assumed. Despite my best efforts, I haven’t found a single racist or discriminatory university rule or policy on my campus. If anything, what I have seen is an institution, like others, desperately trying to absolve itself of the supposed original sin of whiteness—as well as maleness, settler colonialism, cis-heteronormativity, and all the rest.

I have seen efforts to hire new faculty fail because the dean deemed the applicant pool insufficiently diverse. I have seen discussions quashed when faculty members questioned the affirmative-action requirements imposed by government research granting agencies. Emails asking for details regarding an across-the-board salary increase for all female faculty members fell on deaf ears. We have entrance scholarships for “Diversity Champions” to encourage women, minorities, and activists to join our programs. We have prestigious chairs in “indigenous ways of knowing” in certain sciences—which everyone involved knows to be a fundamentally unscientific endeavor, even if we all have to pretend otherwise.

Of note, we have created a position for a Vice-Provost for Equity and Diversity, an enviable position, which, I am informed, comes with a six-figure salary (well above that of your average professor). The hire was announced in early 2020, just as my public university was emptying amid the pandemic. The announcement also came amidst severe austerity measures in the province of Alberta, including layoffs. How many student-facing positions—lab technicians, for instance, who provide real, measurable benefits—could have been spared if we weren’t throwing money at newly-created equity and diversity bureaucracies?

The new vice-provost, who is empowered to speak on the university’s behalf, recently hosted a talk entitled “The racist violence of ‘not racism’ and the role of ‘contrarian’ academics,” in which bizarre assertions were made to the effect that we all inhabit an apparently irredeemable state of racism. A video excerpt appears immediately below (and a second in the same series appears several paragraphs down).

Here is a text excerpt of the sort of material that was presented, all under the ironic banner of “Courageous Conversations”—with no one uttering a peep of protest:

It’s not only public figures like Trump and so on, who constantly deny that they are being racist and claim to be non- or even anti-racist, but ordinary people also, perhaps your friends and your family constantly repeat how “that wasn’t racist” or “I’m not racist.” But I’m suggesting that beyond this well-known denial of racism, what is particular to what I’m calling “not racism” is that it contains a definition of racism, which is constructed negatively through opposition. This definition is characterized by the fact that it denies racialized people’s subjective understanding of what racism is and negates this experience. In this way, “not racism” is what I call a form of discursive racist violence… “Not racism” as a redefinition of racism lends itself to a positivist approach to social science, one that historically has been bound up epistemologically with the idea of race. So “not racism,” I hope to encourage you, is also epistemically racist.

This moment is driven by emotion and social panic, not facts. Just read the university’s response letter cited in the first paragraph: The president is simply mumbling whatever pre-set phrases he thinks will be greeted with approval from the same sort of people who spend their days lecturing us about racism (and the even worse sin of “not racism”). What’s worse, anyone who points out the nonsensical and performative aspects of these presidential letters will be gaslit for his troubles—this, in a supposed citadel of logic and learning. Since Critical Race Theory and its myriad offshoots are based on the claim that racism is like an invisible gas that surrounds us—all the more pernicious for it being undetectable to all but expert anti-racists—its precepts are unfalsifiable. Amazingly, this is happening at a university whose scholars purport to honor the scientific method.

I have my own question for the University of Calgary executive leadership, though I have little expectation of seeing a public response: What actions will you take to create a truly inclusive, equitable environment—one that honors diversity of opinion, and in which students, staff, and academics are no longer terrified of speaking and debating lest they accidentally speak their real thoughts? (In the alternative: If you are so truly convinced that you preside over a fundamentally racist campus, then why do you still have your jobs? Shouldn’t the most obvious way to root out all of this racism be to fire the people who put up with it in the first place?)

In the end, it comes down to careerism. The president’s apparent strategy is simply to string nonsense words together, day by day, week by week, in hopes that he’ll say enough of them, in the correct order, such that the mob moves on. Václav Havel once described the story of a greengrocer coerced into placing the slogan “Workers of the world, unite!” in his window. On its surface, this message has the appearance of being benign, allowing the greengrocer to say, “What’s wrong with the workers of the world uniting?” It masks his degradation, the system of forced obedience. Similarly, many will ask “What’s wrong with being anti-racist?” I ask you to look past the slogans, and examine the fact that we are all forced to utter them.