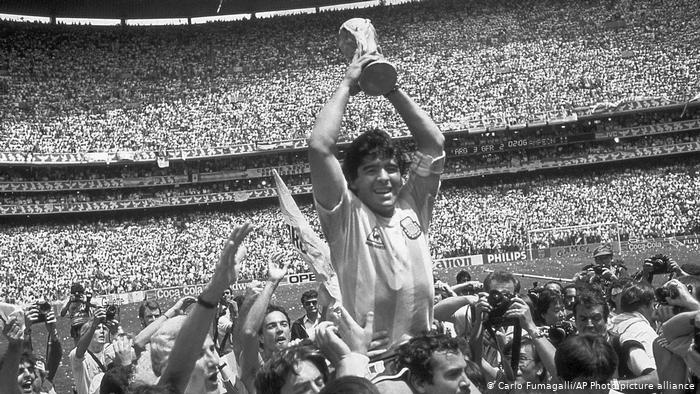 Football icon Diego Maradona has died. Considered one of the greatest players ever, Maradona was known for far more than his infamous ‘Hand of God’ incident. The 60-year-old had recently struggled with health issues.

Argentine football legend Diego Armando Maradona has died at the age of 60, his lawyer announced Wednesday.

According to those in his circle, Maradona suffered a heart attack at his home in the outskirts of Buenos Aires on Wednesday.

Earlier this month, Maradona left hospital having undergone surgery to remove a blood clot on his brain, with his lawyer, Matias Morla, saying it was a “miracle” that the clot “which could have taken his life, was detected.”

Over the last 20 years, Maradona has been admitted to hospital three times for serious health concerns due to drug and alcohol addiction. Recently, due to COVID-19, he had been forced to isolate at home.

Maradona is to be honored by a minute’s silence ahead of Wednesday’s Champions League games.

Many tweeted their condolences, including legendary Brazilian Pele who said he hoped the pair might one day “play ball together in heaven.”

Argentina’s president, Alberto Fernandez, tweeted “You took us to the highest point of the world, and made us immensely happy.” The Argentine government has declared three days of mourning.

Football icon and ‘hand of God’

Maradona was widely considered one of the greatest players of all time, particularly for his skill with the ball at his feet.

To understand Maradona the best place to start is probably the quarterfinal of the 1986 World Cup. During the 90 minutes of Argentina’s clash against England, Maradona’s life was perhaps displayed through moments of genius and scandal in the sport he loved and was so skilled at.

In front of 100,000 fans watching on in the Estadio Azteca, Argentina played England to the backdrop of the Falklands War at the start of the 1980s, unrelenting sun and a scorched pitch.

Fifty-one minutes into the game, England tried to clear a ball coming into the box but in the end sent it towards their own goal. There’s no doubt England keeper Peter Shilton would have caught it but the little man in the dark blue jersey leapt into the air and punched the ball into the goal. Argentina celebrated, the referee had seen nothing.

A few minutes later, Maradona’s magic followed his madness as he scored one of the greatest goals of all time, dribbling in and out of England players all the way from the halfway line before finishing past Shilton. The Argentinian commentator said it had been a goal like a poem.

Argentina won that game and the World Cup, beating Germany 3-2 in the final, but the world kept talking about that goal against England. Maradona stood by his act, telling reports after the game: “It was a goal through the hand of God and the head of Maradona.”

Maradona was born on October 30, 1960 as the fourth child of eight in Lanus, just south of the Argentine capital Buenos Aires.

His international career began at 16 and it peaked at the World Cup in Mexico in 1986. At club level, he played for Argentinos Juniors and then Boca Juniors, where he won a national title.

He then joined Barcelona but sparkled brightest at Napoli, who signed him for a then enormous fee of $10.5 million. In Italy, he spent seven years of his career, became a local icon and helped the club win their first two league titles.

Between 1989 and 2004, Maradona was married to his childhood sweetheart Claudia Villafane and the pair had two children together. From a relationship he had outside of his marriage, Maradona has another son, one that he first met when the young man was 17.

Off the field at Napoli though, there was much speculation of Maradona having contact with the Camorra, the Neapolitan mafia. It was at this time that Maradona’s cocaine addiction also reportedly began. A positive doping test in 1991 for cocaine led to the dissolution of his contract at the club.

In 1994 at the World Cup in the US, Maradona was suspended due to doping after the second group-stage game. He retired from competitive football at the age of 37 in 1997.

In January 2000, Maradona suffered a bad heart attack, brought on by his obesity and his cocaine addiction. Four years later, he was brought into a clinic again with his health in danger. This time high blood pressure, breathlessness and a lung infection were the cause. Those around him denied rumors of a drug addiction, but in the same year he spent a long time in a drug clinic near Buenos Aires.

No success as a coach

After a sleeve gastrectomy, Maradona’s health improved. He had his own television show and he began working as a coach, but was unable to transfer the success of his playing days to the dugout.

In October 2008, Maradona was named head coach of Argentina’s national team, taking them to the quarterfinals of the 2010 World Cup in South Africa, where they lost 4-0 to Germany.

But spats with journalists aided his departure from the job after two years.

For all of the scandal and controversy off the field and for all of his struggles with drug use, overeating and alcoholism, Maradona played football perhaps like no one ever did, or ever will.