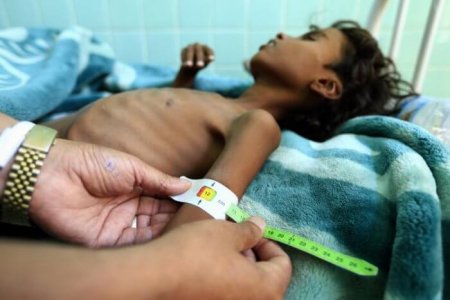 Acute child malnutrition rates have reached record levels in parts of the country, up 10% just this year. Nearly 325,000 under-fives suffer from severe acute malnutrition and are fighting to survive.

“As Yemen slowly inches towards what the UN Secretary-General has described as potentially ‘the worst famine in decades,’ the risk to children’s lives is higher than ever.

“The warning signs have been clear for far too long.

“Acute child malnutrition rates have reached record levels in some parts of the country, marking a 10 per cent increase just this year.

“Nearly 325,000 children under the age of five suffer from severe acute malnutrition and are fighting to survive.

“Chronic poverty, decades of underdevelopment, and over five years of unrelenting conflict have exposed children and their families to a deadly combination of violence and disease.

“The COVID-19 pandemic has turned a deep crisis into an imminent catastrophe.

“Yemen is a country beset by violence, pain and suffering. The economy is in shambles. The health system has been on the verge of collapse for years. Countless schools, hospitals, water stations and other crucial public infrastructure have been damaged and destroyed in the fighting. Disregard for international humanitarian law is shockingly blatant.

“UNICEF has been on the ground in Yemen for decades. In recent years, we have expanded our presence to accelerate the delivery of humanitarian assistance to millions of children, helping alleviate suffering and save lives.

“But we cannot hold back the tide indefinitely.

“All parties to the conflict must keep children out of harm’s way and allow unhindered access to communities in need – as is their duty under international humanitarian law.

“Donors must step up and provide urgently needed additional funds. As we approach the end of the year, UNICEF’s humanitarian appeal has received just US$237 million of the US$535 million required, a funding gap of almost US$300 million.

“Humanitarian aid alone will not avert a famine nor end the crisis in Yemen. Stopping the war, supporting the economy and increasing resources are critical.

“There is no time to waste.

“Children in Yemen need peace. An end to this brutal conflict is the only way they can fulfil their potential, resume their childhood and, ultimately, rebuild their country.”