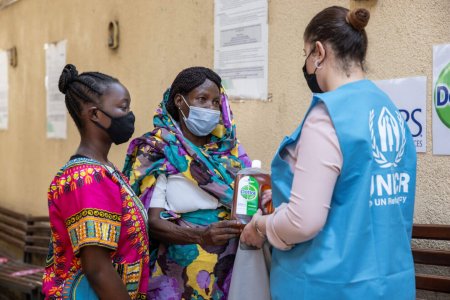 Many have lost their source of income and have found it even harder to buy food or pay rent. Unaccompanied and separated children have become increasingly vulnerable and reports of GBV are rising.

Pacing around the small living room of the apartment she shares with three other women, Zahra keeps her eyes locked on her phone. For months, she has been clutching on to the hope of receiving a phone call from a prospective employer.

However, as an adult, she had to capitalize on the skills she harnessed to support herself. “I relied on odd jobs to get by. I worked as a waitress and as a domestic helper,” she said.

But Zahra’s fragile livelihood crumbled under the devastating impact of the coronavirus pandemic, which is projected to set off an economic downturn for many refugee-hosting countries in the Middle East and North Africa. For Zahra and many of the 258,862 registered refugees and asylum-seekers in Egypt, the immediate effects have already been strongly felt.

“I could not pay the rent for three months in a row and I was living in fear of being evicted every day,” she said. “No one can put up with a late tenant for long,” she added, reflecting on her refugee flat mates, whose situation is not much different from hers.

In September, Zahra was one of 1,495 vulnerable refugees and asylum-seekers, primarily from Syria, Sudan, South Sudan, Eritrea, Ethiopia and Somalia, who received immediate short-term assistance as part of UNHCR’s increased efforts to help mitigate the negative socio-economic impact of the coronavirus outbreak.

This follows the disbursement of cash for hygiene that has been extended to 51,505 refugees and asylum-seekers at heightened risk, including persons with chronic illnesses and elderly people since April.

“I don’t know what I would have done if I had not received this assistance,” said Zahra. “I managed to pay months of past-due rent.” Although the assistance has managed to keep the threat of eviction at bay for some time for Zahra and others, many refugees and asylum-seekers still dread their rent due dates.

This is the same for Hayat, a 50-year-old widowed mother of three from Syria. “I have to borrow or rely on charity to make sure I can pay the rent,” she said. “But our landlord is a good man who is patient with us,” she added.

Like Zahra, Hayat received short-term assistance to support her and three daughters. “If I could, I would buy them everything they wish for,” she said, a sad tone caressing her motherly voice. But for now, she can only afford to buy necessities for her family and not the new clothes her daughters have been tugging at her to buy.

Hayat also receives education grants for two of her daughters. The grant, provided by UNHCR through its partner Catholic Relief Services, aims to facilitate access to education and keep refugee children in school.

Nevertheless, the lack of a stable source of income means that the mother of three is always on the lookout for a rainy day and keeping her household expenditures to an absolute minimum.

Before the COVID-19 outbreak, the majority of refugees and asylum-seekers in Egypt were already highly vulnerable, with seven out of 10 refugees unable to meet their basic needs and often forced to adopt negative coping mechanisms such as incurring debt or reducing expenditure on food and other essential items to survive.

Following the outbreak, many have lost their source of income and have found it even harder to purchase food or pay rent. In addition, unaccompanied and separated children have become increasingly vulnerable, and reports of gender-based violence are on the rise. Older refugees and persons with special needs and medical conditions have also been among the most affected by the pandemic.

COVID-19 has also severely affected UNHCR’s activities. With the need to minimize the risk of viral infection a priority, in-office interviews were temporarily postponed and replaced by innovative alternatives to ensure continuity of critical programs remotely.

Despite this, monthly unconditional cash grants continued to be delivered to extremely vulnerable refugees and asylum-seekers from different nationalities, reaching over 39,142 individuals between the months of July and September.

Furthermore, additional cash programs were introduced to allow for a more flexible response in the face of COVID-19, including an interim cash scheme that targets those susceptible to COVID-19 vulnerabilities and an interim cash program to support refugees and asylum-seekers facing serious protection risks. As of September, 4,625 individuals benefitted from the latter program.

More specifically, UNHCR’s thirteen infoline numbers were reinforced with unit-specific mailboxes and hotlines to receive questions and provide real time responses to callers. Between July and September, UNHCR responded to a total of 55,671 calls through its infoline and registration hotline.

In June, UNHCR resumed its refugee status determination and resettlement activities. In August, it resumed registration with caution and in a limited manner. This is to ensure that particularly vulnerable refugees and asylum-seekers in need of urgent services are served without exposing other refugees or staff to undue risks.

Since the onset of the coronavirus crisis, UNHCR has scaled up its work to provide protection services and humanitarian assistance to refugees and asylum-seekers registered in Egypt, thanks to the support of its generous donors. As a result, 80,000 individuals benefited from at least one type of cash assistance provided by UNHCR until November 2020. However, the gap between needs and available funding continues to grow, especially in the context of COVID-19.

Additional funds will allow UNHCR to include more vulnerable refugees and asylum-seekers in its COVID-19 response and help alleviate some of the burden on their shoulders.