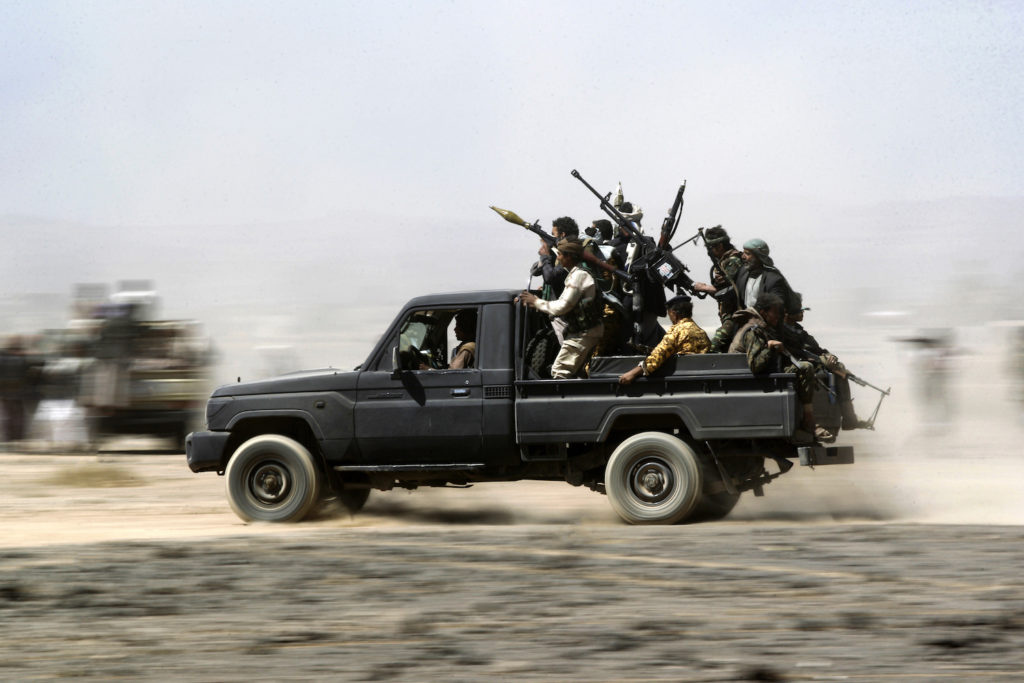 TOPSHOT - Armed Yemeni tribesmen loyal to the Shiite Huthi rebels sit in the back of an armed vehicle during a gathering to mobilise more fighters into several battlefronts on November 1, 2016 on the outskirts of the capital Sanaa. The war in Yemen escalated in March 2015 when the Saudi-led coalition launched a military campaign to push back the Huthi rebels, after they seized the capital in 2014 and then advanced on other parts of Yemen. / AFP / MOHAMMED HUWAIS (Photo credit should read MOHAMMED HUWAIS/AFP/Getty Images)
Share
Facebook Twitter LinkedIn Pinterest Email

Indications that the US is considering declaring Yemen’s Huthi rebels a “terrorist organisation” have alarmed humanitarian groups who say it could cripple aid delivery and tip the country into famine.

The Iran-backed Huthis are at the centre of a flurry of diplomacy as the administration of US President Donald Trump, which has made isolating its arch foe Tehran a centrepiece of its regional policy, enters its final weeks.

Officials confirmed to AFP reports that the US is laying the groundwork for a designation of the rebel group, which controls the capital Sanaa and much of the north after a grinding five-year war that has created the world’s worst humanitarian crisis.

“The issue here is that if they are defined as a terrorist organisation, that has many consequences,” said one Western diplomat in the Gulf who oversees Yemen.

“Some or many countries will have problems in dealing with them at all, and that can complicate the whole ‘peace’ process and the UN’s work,” he said, referring to hopes for an end to the conflict.

The impact on the Huthis, who are already under US sanctions, may be limited but ordinary Yemenis could pay the price, with further damage to programmes already cut back due to record-low funding during the coronavirus pandemic.

Everything from interacting with Huthi officials, handling taxes, using the banking system, paying health workers, buying food and fuel and arranging internet services could be affected.

Jan Egeland, head of the Norwegian Refugee Council, said his organisation joined other humanitarian groups “in expressing deep concern at the prospect of additional, near-insurmountable hurdles to providing lifesaving aid in Yemen”.

If the US goes ahead with the move they must issue “clear and unambiguous exemptions” that will allow aid workers to operate without fear of legal repercussions, he said.

The Huthis reacted angrily to the prospect of the US designation, saying Trump had no right to make the ruling after failing to win a second term.

“The US elections are over and someone else won but he still insists that he was victorious. This man’s statements have no meaning any more,” said Sultan Al-Samee, vice president of the political council of Ansar Allah, the movement’s formal name.

“If he designates Ansar Allah as a terrorist organisation, then this would be coming from an unqualified person who is going totally insane,” he told AFP.

However, the move is expected to be welcomed by Saudi Arabia, a Trump ally which tagged the Huthis as a “terrorist” group in 2014 before entering Yemen’s conflict as the head of a military coalition to bolster the beleaguered government.

Yemeni Information Minister Moammar Al-Eryani said the rebels deserved the US designation because of their “violations against civilians, sectarian incitement, & attacks on neighbours”.

Before the war erupted, Yemen was already the poorest country in the Arabian Peninsula, and with its economy now in tatters, some 80 percent of the population depends on aid to survive.

Even without the prospect of an interruption in the humanitarian effort, the United Nations has repeatedly warned it is at risk of sliding into famine.

While US congressional sources confirm the issue is being deliberated, it remains hotly contested and it is unclear whether the process can be completed before President-elect Joe Biden is sworn into office on January 20.

State Department counterterrorism coordinator Nathan Sales said: “We don’t sneak-preview any designation actions that we might or might not be contemplating.”

Democratic members of Congress wrote to Secretary of State Mike Pompeo, calling for efforts to protect Yemenis from the fallout.

The looming designation “is likely to only worsen this devastating humanitarian crisis and poses a serious obstacle for both the already overstrained humanitarian response and precarious political process in Yemen,” they said.

Biden has signalled a reset in the Gulf, after Trump gave free reign to governments in the oil-rich region which are big customers of US-made weaponry and welcomed his tough approach on Iran.

But in Sanaa, there is a sense that a decision is imminent.

An aid worker said a travel advisory warning American staff to consider relocating to the south or leave the country had caused disquiet.

“We’ve been aware of this for a couple of months now… but in the last few weeks, we understand through diplomatic and UN sources is that it’s really heating up. And now the sense is it’s coming any day,” she told AFP.

“We are concerned about what this means for safety and security for us as aid workers, and the potential backlash.”

A senior humanitarian official said there had been no change yet in the United Nations’ security posture.

“So far, despite reports, there is no withdrawal of staff just forward rotations. If there is a designation, the UN’s security system will have to take that into account as a risk,” the official told AFP on condition of anonymity.