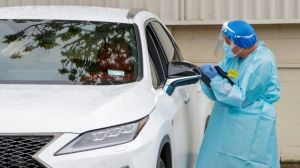 South Australia’s six-day “circuit-breaker” lockdown will be cut short, officials said Friday, blaming a pizza chef who misled contact tracers about how he contracted the virus.

Marshall said a man who claimed he was a customer at a pizza parlour hotspot — leading authorities to believe the strain was virulent enough to be transmitted via a takeaway box — in fact worked there.

“One of the close contacts linked to the Woodville pizza bar deliberately misled our contact-tracing team,” said Marshall. “Their story didn’t add up. We pursued them. We now know that they lied.”

Red-faced authorities stressed the costly lockdown had still been necessary — and that pizza parlor customers should still come forward for testing.

On Wednesday, they ordered schools, shops, pubs, factories and even takeaway restaurants to close and stay-at-home orders were issued for residents across the state.

Since then, tens of thousands of tests have shown no new community transmission and the cluster totals only 25 cases, leading to accusations that authorities overreacted.

People in Adelaide and the rest of the state will be able to leave their homes immediately to exercise, and most other restrictions will be eased late on Saturday.