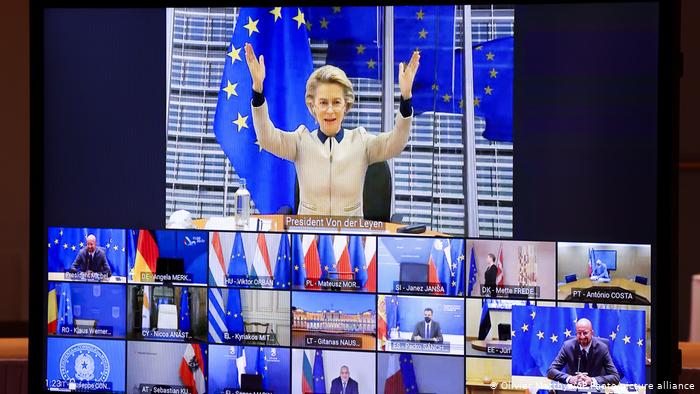 EU leaders have made no headway on the veto of its budget and coronavirus bailout package. Poland and Hungary have blocked their passage over stipulations they uphold the rule of law.

European Union leaders argued at a summit Thursday over Poland and Hungary’s attempts to block the passage of the EU budget and coronavirus rescue package.

The two holdouts reaffirmed their position at the video conference. Leaders agreed to park the dispute and hand it over to experts to find a way forward.

Germany’s Chancellor Angela Merkel said the block means “we have to continue talking with Hungary and Poland.”

“There is consensus on the EU budget, but not on the rule of law mechanism,” she told journalists. The chancellor also said that she did not want to speculate as to how the issue with Budapest and Warsaw would be resolved.

Merkel: ‘We have a duty to try’

Merkel described it as a “very serious problem” and said that Germany would look into all available options. “We are still at the beginning here,” she said.

When asked if one of those options would be to threaten the two countries with taking away their voting rights, Merkel said: “For me, the word threat in this context is not a word at all. We have a duty to try and find a way.”

Merkel also said said the bloc would discuss Turkey and its search for natural gas in contested regions of the Mediterranean at the next summit, in December.

“Things haven’t developed the way we would have wished,” she said. 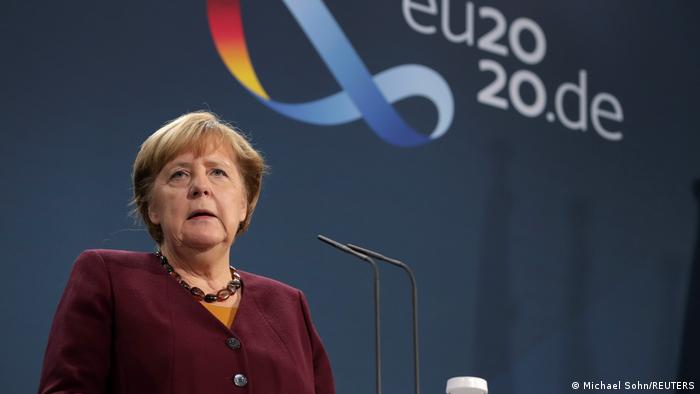 ‘People’s jobs depend on this’

European Commission Vice President Frans Timmermans said: “It is in the interest of everyone that we move quickly on this. People’s jobs depend on this.”

“Our economic recovery depends on this. All that is being asked of member states is to respect the treaties they have signed and ratified. That’s it.”

EU Council President Charles Michel said on Twitter that the meeting would focus on coronavirus coordination in the bloc, focusing on mutual recognition of corona tests, preparations for vaccinations and a common approach to lifting corona restrictions.

The meeting was dominated by Poland and Hungary’s decision earlier this week to block the adoption of the EU budget and coronavirus recovery package. The two member states announced their intention to veto the combined €1.8-trillion ($2.1 trillion) pandemic recovery plan and the long-term budget over objections to new rule of law requirements.

A new mechanism allows for the reduction of EU funds if member states severely violate rule of law principles. Poland and Hungary — partially backed by Slovenia — claim that such a rule is tantamount to a power grab by a “European oligarchy,” and that Brussels is trying to bully more conservative countries that don’t accept unmitigated immigration.

Can Poland and Hungary be by-passed?

The rule of law mechanism — which has widespread support — only requires a qualified majority to pass. However unanimous backing is required to allow the EU to raise funds to finance the recovery plan and 2021-2027 budget.

France and the Netherlands have suggested a long-shot plan of pushing ahead with an intergovernmental recovery plan that excludes the holdouts. EU sources have said such an option is “on the table” but is premature and technically complex.

An alternative approach is to appease the two member states with assurances they will not lose funds. However, the European Parliament made it clear on Wednesday that it would make “no further concessions” to the rule-of-law mechanism.

The meeting was originally supposed to focus on efforts to coordinate a common strategy to prevent a third wave of coronavirus infections in 2021.

The Organization for Economic Co-operation and Development (OECD) reported that hospitals in Europe were suffering from a lack of staff, and that governments needed to find better strategies for easing restrictions to avoid further lockdowns, particularly in regards to testing and tracing infection chains.

Ahead of Thursday’s meeting, Germany — current holder of the rotating EU presidency — prepared a document that revealed wide divisions among the bloc on coronavirus cooperation, particularly in regards to the use of rapid (but more inaccurate) antigen tests that could facilitate easier travel through the EU.

At an October video conference, EU leaders pledged to coordinate more on testing and tracing. The European Commission has since worked on unifying national tracing apps, but so far only six countries have signed up to a common platform. There is also work on a common digital form to locate passengers on all types of transport.

European hospitals hope they won’t have to apply triage

What is happening on Brexit?

The meeting was also scheduled to focus on post-Brexit trade negotiations before the UK leaves the single market on January 1. The UK left the EU on January 31, 2020, but was given until 2021 to hash out its new relationship with the EU. The two sides are periously close to a cliff-edge divorce, which will have monumental economic and practical implications. The stakes were raised even higher on Thursday after the EU’s chief negotiator Michel Barnier announced that direct talks with Britain’s David Frost were being suspended due to a COVID-19 infection in Barnier’s team.

Several EU leaders were expected to stress the need to prepare for no deal scenario.