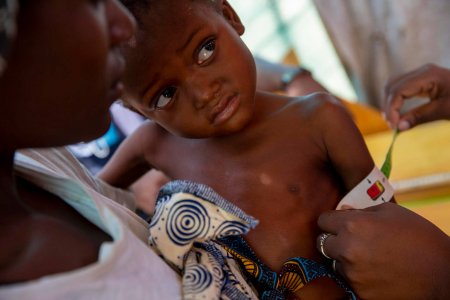 Ahead of the G20 Leaders’ Summit in Saudi Arabia on 21 November, 11 aid organizations are calling for early action to prevent soaring rates of hunger and malnutrition resulting from the pandemic-related global economic recession.

We are seeing spiraling levels of poverty and hunger among refugees and conflict-affected people. Hundreds of thousands still risk being kicked out of their homes, and millions are skipping meals and dropping out of school. The economic impacts of Covid-19 are having a devastating effect on the world’s most vulnerable. G20 leaders have the opportunity and means to address this growing crisis. They must take it,” said Jan Egeland, Secretary General of the Norwegian Refugee Council.

The World Bank estimates that up to 150 million people may be pushed into extreme poverty by 2021. In June, the International Rescue Committee calculated that the anticipated economic contraction could push 54 million more people in developing countries into hunger; October’s downgraded global GDP forecast puts that estimate at 91 million.

Displaced and conflict-affected communities are particularly vulnerable. In recent research by the Norwegian Refugee Council across 14 crisis-affected countries, 77 per cent of survey respondents stated that they had lost a job or income from work since the pandemic broke out, resulting in 73 per cent cutting the number of household meals. The World Food Program recently warned of the increased risk of famine in four countries, citing the impacts of Covid-19 as one contributing factor.

“The G20 has pledged to do ‘whatever it takes’ to support the global economy during this period of emergency. This must include increased financial support to refugees and displaced people, and action to avert food crises. So far, the G20 has failed to make anything close to the commitments required,” said Jean-Michel Grand, Executive Director of Action Against Hunger UK.

The UN’s Covid-19 Global Humanitarian Response Plan for 2020 remains only 38 per cent funded as of the middle of November. Commitments to offer swift support for the poorest through safety nets and cash transfer programs have not been met. The World Bank itself has called for “much more broad-based international action”.

“Early and sustained action by the G20 will not only save the lives and livelihoods of millions, but will prevent the crisis from worsening and build on past development investments made by G20 members,” said David Miliband, CEO and President of the International Rescue Committee. “This must be on the agenda for all G20 members at the upcoming summit.”

Eleven aid organizations are urging the G20 leaders to:

1) Update the G20 Covid-19 Action plan to address the high risks of food insecurity and malnutrition in fragile and conflict-affected states;

;2) Agree to expand inclusive social protection in fragile and conflict-affected states, and coordinate with humanitarian cash providers to reach those at risk of exclusion, including directing multilateral development banks towards this end; and

3) Commit to fully fund the UN’s Covid-19 aid appeals and all UN led Humanitarian Response Plans for both 2020 and 2021. This funding should be fully flexible to allow organizations to adapt and respond to the crisis, and stay and deliver where this is most needed.