Civilians bear the brunt of violence in Mozambique’s Cabo Delgado 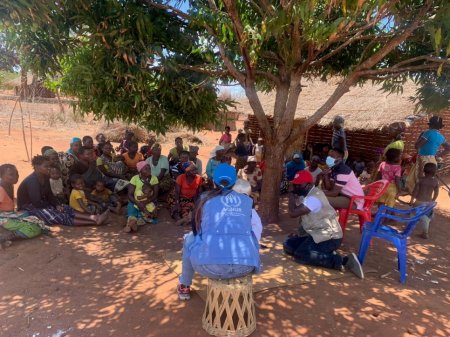 Thousands of people have fled the Muidumbe district due to repeated attacks since last week. There have been horrifying reports of extreme brutality unleashed on civilians by non-state armed groups.

UNHCR, the UN Refugee Agency, is concerned about a worsening security situation in Cabo Delgado province in northern Mozambique. Civilians and especially women and children bear the brunt of mass human rights violations that include brutal attacks and kidnapping.

Thousands of people have fled the Muidumbe district due to repeated attacks on several villages since last week.

There have been horrifying reports of extreme brutality unleashed on civilians by non-state armed groups in the Muidumbe district. Schools, health centers, private houses and government infrastructures have also reportedly been targeted and destroyed.

Many civilians fleeing these attacks have found refuge in Mueda district, staying with host communities or family members. More people are expected to flee in anticipation of fresh attacks.

Violence by armed groups in the Cabo Delgado province has uprooted at least 355,000 people since 2017, according to UN estimates. Many are seeking safety in parts of Cabo Delgado and Nampula and Niassa provinces. Many districts continue to be inaccessible because they are occupied by armed groups or remain at high risk of being attacked. We are concerned that civilians, including the elderly and people with disabilities, remain trapped in those areas.

People continue to arrive at Paquitequete beach, in Pemba district, mainly from Macomia, Quissanga and Ibo island. The number of displaced people who have arrived in this area since mid-October is 14,353. Hundreds are living on the beach in precarious conditions and clean drinking water is the most urgent need, according to a UNHCR assessment. People also face a lack of hygiene and sanitation as well as overcrowding.

Humanitarian agencies including UNHCR have provided food, water, and hygiene services but more needs to be done urgently due to new arrivals in the Pemba area. Access to some areas remains limited due to violence and insecurity.

UNHCR has appealed for US$ 19.2 million to meet the most basic needs of the displaced people. Financial requirements are currently 39 per cent funded.