UN seeks $45.5 million to help thousands hit by Typhoon Goni in the Philippines 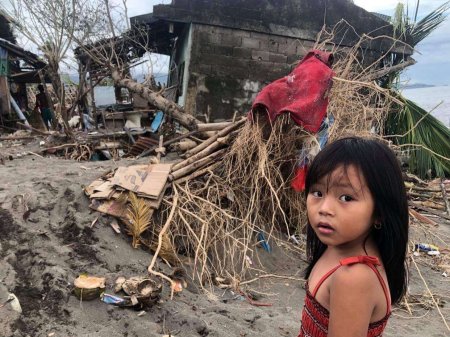 Typhoon Goni caused significant infrastructure damage, put at $234 million. Sixty-seven health facilities have been damaged, including the main COVID-19 laboratory in Bicol and testing was suspended.

845K PEOPLE IN NEED OF ASSISTANCE

In supporting the government-led response to Typhoon Goni, the country-based humanitarian partners under the Humanitarian Country Team (HCT) umbrella will focus on life-saving and time-critical recovery needs of people, especially women and girls, living in the hardest-hit provinces, Albay and Catanduanes. In line with government’s invitation to engage in a collective effort to provide assistance, the HCT will, from November 2020 to April 2021:

Assistance will be delivered in a manner that minimizes the risk of COVID-19 for disaster-affected people. Necessary measures shall be taken to ensure that the zero tolerance policy to sexual exploitation and abuse as stipulated in the Secretary General’s Bulletin ST/SGB/2003/13 is strictly observed.

On 1 November 2020, Super Typhoon Goni, the world’s most powerful tropical cyclone this year thus far, brought torrential rains, violent winds, mudslides and storm surges to the Philippines’ largest island of Luzon. The typhoon, locally known as Rolly, left extensive destruction and damage in its path, killing at least 24 people, injuring 399 and displacing 130,266 people as of 9 November, according to the National Disaster Risk Reduction and Management Council (NDRRMC) and Department of Social Welfare and Development (DSWD). The typhoon has affected 1.9 million people in 8 of the country’s 17 regions, leaving an estimated 845,000 people in need of assistance.

Typhoon Goni made four landfalls in southern Luzon, with the Bicol Region bearing the brunt of its impact. Bato municipality in the eastern island province of Catanduanes was first hit with maximum winds of 225 km/h. The Philippine Red Cross reports that 80 to 90 per cent of the houses have been damaged in the provincial capital Virac. Communication and power lines were cut off, isolating 11 towns.

The typhoon then made landfall near Tiwi town in Albay province, where flooded rivers overflowed and coastal towns and low-lying areas were inundated. Volcanic mudflows from the active Mount Mayon buried at least 300 houses in Guinobatan municipality.

The typhoon progressively weakened as it hit Quezon and Batangas provinces south of Metro Manila before heading out to the West Philippine Sea as a tropical storm.

Of the 32 affected provinces, government reports indicate significant damage in Albay, Catanduanes, Camarines Sur and Quezon. Several local authorities have declared a state of calamity to access emergency funds and reprogram other funds for disaster response.

Food assistance, cash or work for food, shelter repair kits, hygiene kits, repair of water, sanitation and hygiene (WASH) facilities, restoration of power and communication facilities, and psychosocial support and protection are the most-needed assistance, according to initial assessments. A combination of support is needed to address interrelated needs.

More than 137,000 houses have been damaged or destroyed with more than 60 per cent of the destruction recorded in Albay and Catanduanes, according to the DSWD report of 9 November. The typhoon was so strong that it not only destroyed houses made of light materials but also those that were built with concrete. Most families who evacuated as a pre-emptive measure have returned to their homes and have started to repair their damaged houses. Families who are unable to repair their damaged or destroyed houses remain in evacuation centres or with families or friends, and need immediate emergency shelter assistance and further shelter recovery support.

Typhoon Goni caused significant damages to health facilities, schools and essential services. Damage to infrastructure reached Php11.3 billion (US$234 million). According to government reports, 67 health facilities have been damaged, including government’s main COVID-19 laboratory based in Bicol and testing was suspended. The typhoon also damaged over a thousand schools, not sparing those that housed evacuees. With electricity posts and mobile phone towers toppled, it may take months to restore essential lifelines.

The typhoon compromised access to safe water and sanitation facilities, heightening the risk of communicable disease outbreaks. The affected people are now subsisting on springs and hand pumps for water, many of which are reported to have been contaminated by flood and sea waters. Many families whose homes have been totally or partially destroyed are reported to lack access to adequate sanitation and hygiene facilities and materials. Those in evacuation centres – many of them schools – are living in congested conditions with limited access to adequate WASH facilities that meet COVID-19 health standards.

Livelihoods have been lost, particularly of those who depend on farming or fishing to make a living. NDRRMC reports that 95,000 ha of agricultural land were affected across eight regions with Php3 billion ($61 million) worth of damage to rice, corn, high value crops and abaca. Catanduanes and Albay were the hardest hit, accounting for more than half of the overall damage to agriculture.

Typhoon Goni struck as the Philippines faced multifaceted challenges. The country has one of the highest levels of COVID-19 transmission in the Asia Pacific region. More than 396,400 cases have been confirmed of which 27,200 are active, and 7,539 have died as of 8 November, according to the Department of Health (DOH). Although relatively less affected, Albay reports 980 confirmed and 65 active cases, while Catanduanes has 132 confirmed and 8 active cases.

In addition to the serious public health consequences, the pandemic and the measures to contain it have triggered the Philippine economy to contract by 7.3 per cent in 2020, according to the Asian Development Bank report of September. Jobs were lost and remittances from workers overseas dropped sharply when widespread and stringent lockdown measures were in place. The World Bank suggests that years of steady decline in poverty will suffer a setback.

Vulnerabilities are increasing. Prior to the typhoon, the proportion of families experiencing hunger in the Philippines was seriously deteriorating from 8.8 per cent in December 2019 to a record-high 23.8 per cent (estimated 2.6 million households) by September, according to the Social Weather System survey. The prevalence of wasting in Albay and Catanduanes was above 10 per cent, which is double the 2018 national prevalence, according to government reports. The nutrition status will further deteriorate in an emergency context.

Economic recovery is fragile. The Asian Development Bank forecasts a slow recovery in the second half of 2020 and a stronger growth at 6.5 per cent for 2021, which is subject to downside risks such as the resurgence or escalation of the pandemic. Economic recovery for the Philippines, which will influence the recovery from the typhoon, will also depend on developments in world trade and the global economy.