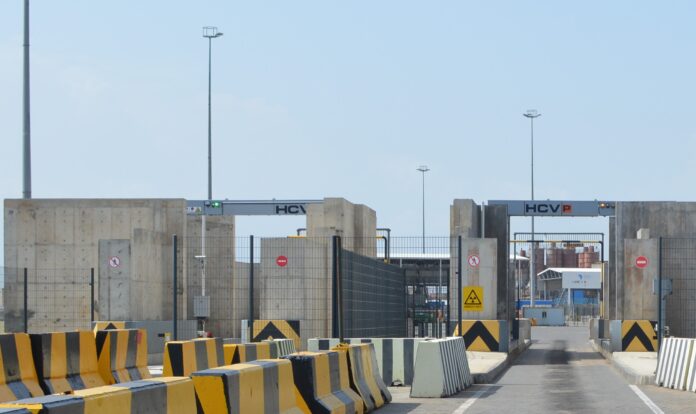 This investment brings to 6, the total number of Drive-Through Container Scanners installed in the terminal.

Commenting on the development while handing over to the Operations Team, The Head of Construction, Mr. Matthieu Ferraro indicated that MPS consistency in the port development and the innovative vision has led to this. When asked if this was not going to result in redundant capacity considering the existence of 5 fully functional scanners, he explained that the rationale behind this is much more than redundant capacity as this 6th scanner will serve as a back up to the other 5 scanners during the routine maintenance without interrupting the flow of cargo.

“When you look at the growth of volumes, since the start of operations at MPS Terminal 3 there has been steady volume increase. In addition, I would say this is being proactive to have reserve capacity and a good response to the foreseen future” said Mr. Ferraro.

“While we advocate to play a pivotal role as a nation, we must also look at the vital investments that will gear up our facilities to present a secure trading platform and enhance our role as a gateway to the economy,” Said Mr. Samara.

The HCVP Scanner is a latest of its kind drive-through portal for the inspection of trucks, containers and other vehicles providing the Customs Officers with cargo manifest verification against the captured X-Ray images, reducing the need for manual inspections. It can also detect drugs, explosives and weapons.

Its accelerators allow for steel penetration from 230mm (9in) to 300mm (11.8in) while providing a high throughput. It has a small carbon footprint with the ability to allow a throughput of 100 to 120 vehicles per hour.

The CEO of MPS put emphasis on the sophisticated software of the Container Scanners that has been put to the exclusive use of the Customs Division of Ghana Revenue Authority and the respective Government Agencies for enhancing Boarder Security and Safeguarding the State Revenue while providing the highest operational standards to the port users.

“This cutting-edge machinery is part of the MPS’s long standing vision of creating a digitally advanced port facility integrated with the latest technology. It is also in line with the Vice President’s ease-of-doing-business measures that MPS has implemented to enhance Tema Port’s competitiveness and attract more cargo”, the CEO said.